Earthquake relief promises made by Nepal government, organizations and individuals 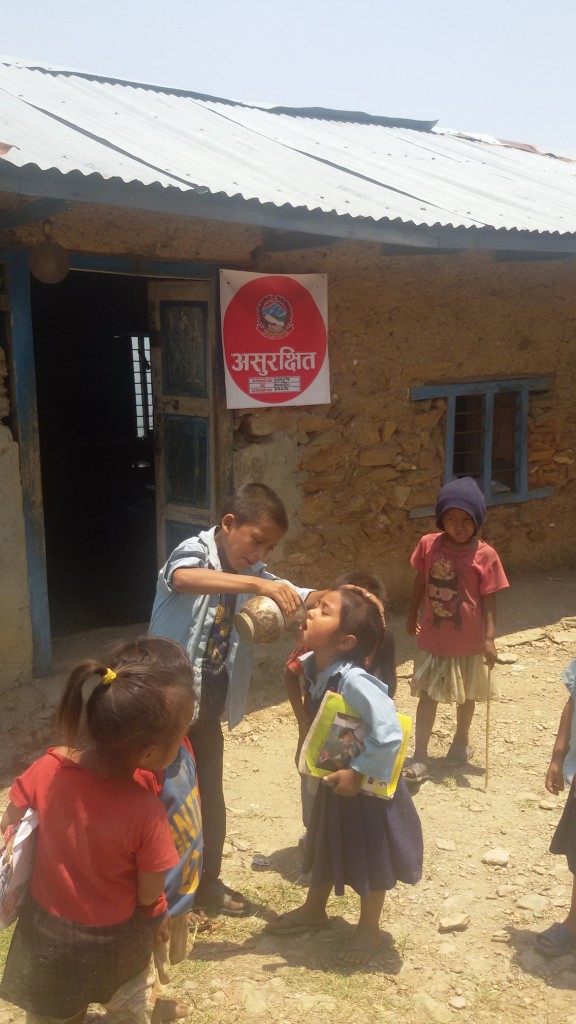 Children at an earthquake-damaged school in Jogimara village in Dhading district. The red poster on the wall says the school building is unsafe.

Non-resident Nepali billionaire businessman Upendra Mahato has promised to provide Rs 150 million in assistance for the relief and rehabilitation of the earthquake victims. He has announced to spend Rs 120 million for the reconstruction of schools in areas severely affected by the earthquakes whereas the remaining amount was meant for distributing relief packages to the victims. He announced to do all these works through a charitable organization, Phul Kumari Mahato Memorial Trust established in memory of Mahato’s mother.

Chaudhary Group has promised to build 1,000 transitional houses for the people made homeless by the earthquakes. For this, the CG has announced to spend Rs 10 million.

CG has also promised to build another 9,000 homes for the displaced in collaboration with the national and international agencies. The Group has also announced to rebuild 100 community schools damaged by the earthquake and has announced to spend a total of Rs 250 million in the long run.
Golchha Organization

Higher Secondary Education Board (HSEB) has announced scholarships for the students of grade 11 and 12 who were made victim by the earthquake. HSEB has announced to waive off fee to such students and has also decided to offer boarding facility to the needy ones.

HSEB has announced that scholarship will be offered to those students who were injured or lost their parents or whose houses were destroyed by the quake. For this, HSEB has asked the students to submit a recommendation letter from the VDC or ward office of the municipality, school and the District Disaster Relief Committee.

Prime Minister Sushil Koirala, while addressing the parliament on 25 Baisakh, 2072 [ May 8], made the following announcements:

Finance Minister Dr. Ramsharan Mahat, while tabling the budget for the fiscal year 2015/16 in parliament on July 14, 2015 made the following announcement on behalf of the government: