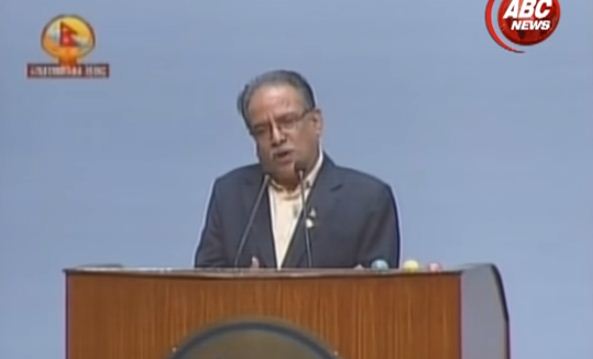 During discussions in parliament last week on a no-confidence motion filed against Prime Minister KP Sharma Oli, the chairman of the CPN (Maoist Center) and former prime minister, Pushpa Kamal Dahal, made the following comments:

“We had grievances about the budget…there were many…the budget ceiling for a certain ministry had been fixed at Rs 5-7 billion, but Rs 25 billion was allocated (by the finance minister)…I think that the ministry is headed by the prime minister, it is the Ministry of Urban Development.”

For this, the following two statements of Chairman Dahal have been examined:

First statement: Budget limit for the Ministry of Urban Development had been fixed at Rs 5-7 billion for this year.

Every year, the Resource Committee of the National Planning Commission recommends budget ceilings for all the ministries. When South Asia Check enquired about budget limit for this year for the Ministry of Urban Development, Joint Secretary at the National Planning Commission, Gopi Mainali, said, “The budget ceilings fixed by the committee is classified information. These are not made public.”

Therefore, it cannot be said whether Dahal’s statement about the ceiling is correct or not.

According to the budget for the current fiscal year, about Rs 23.50 billion has been allocated for the Ministry of Urban Development. For details, see Annex-7 of the budget speech.

Therefore, this statement by Chairman Dahal is almost correct.

Deputy speaker Tumbahangphe is still a member Nepal Communist Party Shiva Maya Tumbahangphe’s resignation from the Nepal Communist Party upon her election to deputy speaker should not be counted as her disassociation from the party, according to the law. Read More
NBA chief incorrect about Sri Lanka’s bank lending rate President of Nepal Bankers Association Bhuvan Kumar Dahal in a television interview claimed that the lending rate in Sri Lanka is "not less than 16-17%." But this is incorrect. Read More
Nagdhunga tunnel road will be Nepal’s third, Churia tunnel road is first and Bhulbhule’s second Swiss geologist Toni Hagen in his book “Building Bridges to the Third World: Memories of Nepal 1950-1992” mentioned about a 100-meter-long tunnel road in Nepal. Read More