Did Nepal save diesel worth Rs 16 billion in a month and a half? That’s nonsense 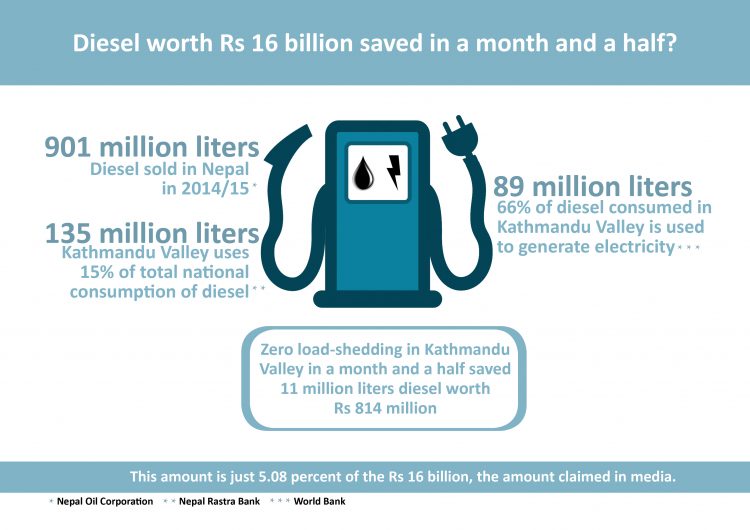 Reports have been circulating in the social media and some communications media claiming that between Rs 14 billion and Rs 16 billion was saved in a month and a half since the Dashain and Tihar festivals this year as a result of reduced diesel consumption after the Nepal Electricity Authority ended the load-shedding in the Kathmandu Valley.

An examination by South Asia Check found this claim to be false.

Since Nepal could not import diesel in full-fledged manner last year due to the Indian blockade, we have taken the import figures of the year before last year as a reference for comparison.

According to a World Bank study, two-thirds of the diesel consumed in the Kathmandu Valley is used for generating electricity. This means, in the fiscal year 2014/15, a total of 89,237,907 liters which is 66 percent of the total diesel consumption in the Kathmandu Valley that year, was used for generating electricity. This is the amount of diesel saved in the absence of load-shedding.

Diesel consumption in Kathmandu Valley is not uniform in all months of a year. But during the Nepali months of Asoj and Kartik (mid-Sept to mid-Nov), consumption is moderate. So we can say that in a month and a half since the Dashain festival, Kathmandu Valley saved 11,154,738 liters of diesel due to the absence of load-shedding. A liter of diesel costs Rs 73, and this means Rs 814,295,874 was saved during the period.

This amount is just 5.08 percent of the Rs 16 billion, the amount claimed to have been saved due to end in load-shedding.

Even if we calculate the nationwide diesel sales for a month and a half of fiscal year 2014/15 on the basis of the current price, that comes to just around Rs 8 billion. Only if the whole of Nepal avoided using diesel for three months that Rs 16 billion could be saved.