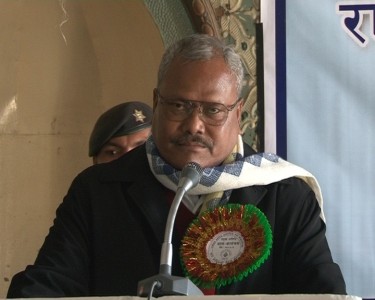 Hinting at the resentment expressed by the people in various parts of the country to the new federal map proposed by big parties, Gachchhadar said:

“People in the midwestern and farwastern regions are opposing it, indigenous nationalities are against it. Tharus form the largest indigenous community of Nepal (in terms of size of population), 1.6 million Tharus live in this country, from Mechi to Mahakali [zones].”

Is Tharu the largest indigenous community of Nepal, as claimed by Gachhchhadar?

No. According to the Census Report-2011 prepared by the Central Bureau of Statistics, Magar is the largest indigenous community of Nepal in terms of the size of population followed by Tharu.

Gachchhadar is nearly correct when he said that Tharu population  stands at around 1.7 million (1,737,470). This is 6.6 percent of the total population of Nepal.

So, the claim by Gachchhadhar is incorrect.

Similarly, Gachhchhadar in an interview with the online edition of Nagarik Daily on 24 August further said:

Click here for Tharu population in Kailali and Kanchanpur districts:

Similarly, after the meeting of the four major parties in Kathmandu on August 23, Gachchhadar had said this to the media:

“The total population of Nepal is 26.4 million and 13.5 million people live in Tarai-Madhesh.”