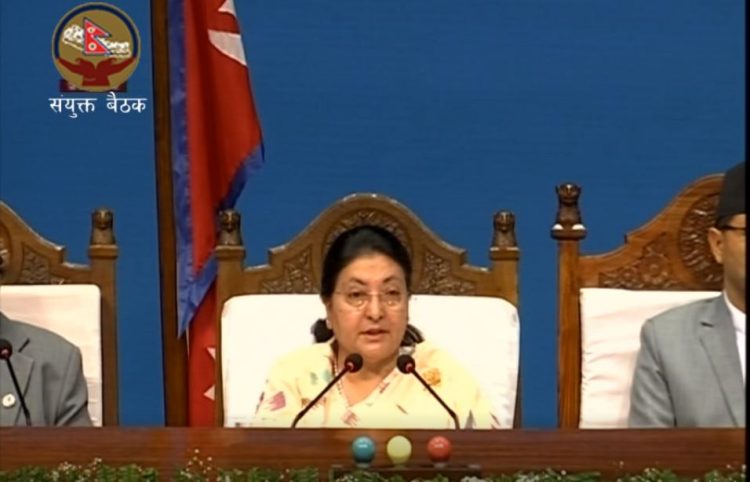 President Bidya Bhandari presenting the government’s policy and program for fiscal year 2019/2020 at a joint sitting of parliament on May 3.  Photo: Videograb from video on www.parliament.gov.np

In an article titled “Packet of self-praise” by Ram Sharan Mahat published in Annapurna Post on May 7, 2019, he has commented on the government’s policy and program for the fiscal year 2019/20 stating: “Another ridiculous claim has been made [in the policy and program] that work on the Raxaul-Amlekhgunj Petroleum Pipeline was started by the current government. It was started many years ago.”

The policy and program presented by President Bidya Bhandari on May 3 stated: “The Amlekhgunj-Raxaul-Motihari petroleum pipeline, work on which was started after the formation of the current government, will be operational from next year.”

South Asia Check did a search to find out when had the work started on the Amlekhgunj-Raxaul-Motihari section of the petroleum pipeline.

A report published by news website www.setopati.com on May 7, 2019 said: “During Prime Minister KP Oli’s visit to India in the first week of April 2018, Oli and his Indian counterpart Narendra Modi had jointly witnessed the ground-breaking ceremony of the Motihari-Amlekjgunj Petroleum Pipeline from Hyderabad House in New Delhi. Then the work to lay the pipeline started.”

Similarly, a BBC Nepali report published on April 8, 2018 stated: “Although the groundbreaking ceremony for the pipeline was organized on Saturday [April 7, 2018], some of the work on the pipeline had started a month before. Officials say a stretch of around three kilometers has already been dug up.”

The Report on Foreign Affairs (2015-16) published by the Ministry of Foreign Affairs in June 2016 has stated on page 15 that Nepal and India signed an MoU for the construction of a Petroleum Products Pipeline between Raxaul, India and Amlekhgunj, Nepal on August 24, 2015.

Other news reports have also mentioned about the signing of the MoU on the petroleum pipeline between Nepal and India.

According to Prabhat 2074, the government on December 24, 2016 included the Motihari-Amlekhgunj Petroleum Pipeline Project in the list of “national priority projects.”

Before this, in 2009, the Nepal Oil Corporation and Indian Oil Corporation had conducted a detailed study and prepared the design of the 41-km Raxaul-Amlekhgunj petroleum pipeline.