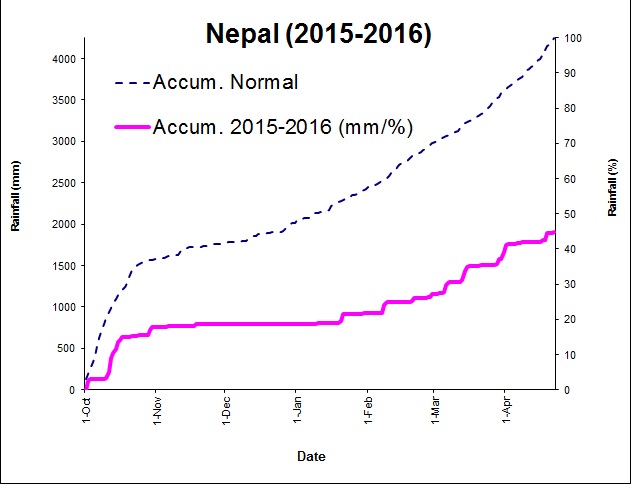 On May 8, Forest Minister Agni Sapkota wrote an opinion piece in Naya Patrika titled “Government efforts against forest fires” where he mentions the following points:

South Asia Check contacted Rishi Ram Sharma, director general of the Department of Hydrology and Meteorology to check whether the numbers cited by the minister were correct. “According to our latest report which we presented to the President, Nepal received 44.8 percent of the normal rainfall this winter (October 2015-April 2016) and the temperature increased by 2 degrees Celsius.”

Therefore the numbers quoted by Minister Sapkota in his article are incorrect.

PM’s suggestion of salt water gargle as home remedy for Covid is misleading The prime minister also said some people had earlier made fun of him for suggesting salt water gargle as a home remedy for Covid-19. Read More
Old photo photoshopped to show Indian flag in February 10 demonstration We found that the original photo, which does not contain the Indian flag, was published almost a month and a half ago by the Nepali-language daily Annapurna Post on its website. Read More
PM made four false claims in two recent speeches In his recent speeches, the prime minister has been repeating some claims that have already been debunked by fact-checkers. Read More