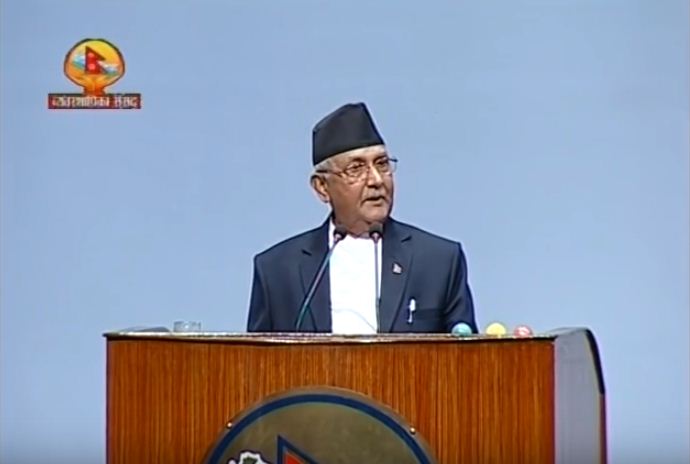 This phrase has drawn widespread criticism in the Nepali media and political circles.

News analyses appearing in several communications media are also critical of the joint statement arguing that the aforementioned phrase is against Nepal’s longstanding non-aligned foreign policy. Leaders of the main opposition party, CPN-UML, have criticized the phrase arguing that it has tried to align Nepal’s independent foreign policy with that of India’s.

Meanwhile, the Ministry of Foreign Affairs issued a statement on September 19 and said that a similar phrase was also mentioned in the joint statement issued by the then foreign minister Mahendra Bahadur Pandey [a UML leader] and his Indian counterpart Sushma Swaraj on July 26, 2014.

Commenting on the press statement issued by the Ministry of Foreign Affairs after Dahal’s India visit, former prime minister and the Chairman of the CPN-UML KP Oli made the following comments in parliament on September 27.

“There is a difference between the [joint] statement issued during the term of foreign minister Mahendra Pandey and this one. During that time, it [the two nations holding similar views] was just related to the progress of backward and weak nations …but this time it’s different.”

South Asia Check has examined whether this claim is fact-based or not.

Point number 11 of the joint statement issued by Dahal and Modi also states that “both countries hold similar views on major international issues…affecting the developing countries…”.

Furthermore, both the statements have reiterated Nepal’s support for India’s candidature for permanent membership of the UN Security Council.