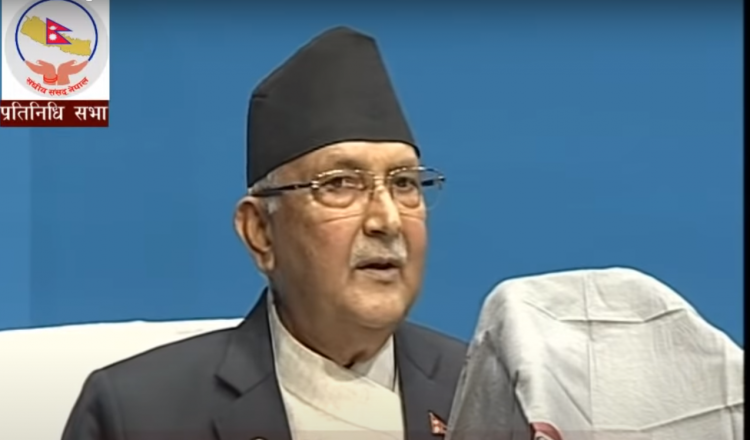 Responding to questions from lawmakers in parliament on June 12, Prime Minister KP Oli defended his government’s measures against the COVID-19 pandemic. Oli spent around one hour and 45 minutes speaking about the pandemic and the budget for the fiscal year 2020/21, which was unveiled on May 28.

During his speech, Oli made some unverified and unproven claims. Social media users questioned his claims and newspapers published reports debunking them. We fact-checked his claims and found that three of them were false.

“Fellow lawmakers have complained that we are conducting fewer PCR [polymerase chain reaction] tests compared to elsewhere [other countries in South Asia]. In terms of tests per million people, we are second only to Bhutan. Bhutan’s population is small. It has closed its international borders. The country had fewer people in foreign countries. Barring Bhutan, we are ahead of other countries [in terms of tests per million].”

Prime Minister Oli’s remarks came when demonstrations have become widespread across the country calling for more PCR tests. Lawmakers have also asked the government to increase PCR tests. According to the figures Prime Minister Oli presented in parliament, Nepal had conducted 106,330 PCR tests and 166,158 rapid diagnostic tests (RDT) until June 11. While experts have questioned the reliability of the RDT, demands are growing for more PCR tests to contain the spread of the disease. Nepal’s daily test rates hover around 5,000.

Prime Minister Oli was apparently comparing the COVID-19 test rates of the South Asian countries. The Maldives appears to be way ahead than other South Asian countries in terms of PCR tests. According to Worldometers, which maintains such database, as on June 14, Nepal’s test rate per million population is 11,821 while Bhutan’s is 26,882 and the Maldives’ test rate per million population stands at 53,588. Therefore, Oli’s claim that Nepal is second only to Bhutan in terms of PCR tests per million is false.

Prime Minister Oli here made misleading claims by generalizing complex and interconnected issues such as geography, desert, atmospheric science and climate, according to experts. Oli’s statement demonstrated that he lacked basic knowledge of science, an expert told South Asia Check asking not to be named.

The monsoon, which enters Nepal from the Arabian Sea and the Bay of Bengal, brings the summer rains, which last for about four months every year. “It is a weather system of regularly reversing winds that bring wet and dry seasons,” the expert said.”Temperatures in Nepal are influenced by macro level interactions between wind sources and topography including elevations,” he said. Nepal’s diverse geography has resulted in different temperatures in different parts of the country. The westerlies bring rains and snow during the winter.

“First of all, the wind does not flow directly from the desert to the high mountains. It first hits the Chure range, then reaches the Mahabharata range, and flows between the valleys. It then hits the mid-hills, high mountains and finally the Himalayan range,” he said. “Hot wind does not directly hit the Himalayas. Temperatures depend on elevations and wind dynamics,” he said. “The higher you go, the colder it gets.” He said Oli’s statement that the wind becomes almost like ice and is ready to flow after hitting the mountains is false because it is the mountain snow that melts and flows after interacting with the wind. “The wind does not turn into ice and flow,” he said.

Atmospheric scientist Ashok Pokharel also called Prime Minister Oli’s claim baseless. “When you talk about hot air from the desert, it means dry air (without moisture in it). It’s not possible for such air to cause rain. Therefore, it’s wrong to say it turns into ice,” Pokharel, who works for Weather Extreme, a US-based company, told South Asia Check.

“Nepali diet doesn’t consist of bread and butter. We have a variety of cereals including pulses, rice, maize and soybeans, and turmeric is a must. Cumin, coriander, onion and garlic are essential ingredients of our food. Salt is essential, so is chili. Nepalis have boosted their immune system by consuming these herbal medicines every day. It goes without saying that they have stronger immunity.”

Over the past few months, Prime Minister Oli has been repeatedly claiming that Nepal has fewer COVID-19 cases because Nepalis have stronger immunity. But the continuously rising COVID-19 cases have proven him wrong. When a lawmaker asked about the source of his claim, Prime Minister Oli brushed it off saying the source was none other than himself. Though the food items Oli referred to are considered healthy, there is no evidence to prove they boost immunity against COVID-19.

“These foods do not boost immunity (against COVID-19). Though fruits and vegetables contain vitamin C and antioxidants, we don’t have any scientific study to link them with enhanced immunity,” said Dr Pushpa Mani Kharal, who specializes in general practice and emergency medicine and is associated with Metro Hospital, Kathmandu. In an interview with news website Nepal Live, Dr Bhagawan Koirala, a senior cardiothoracic surgeon, said such claim was wrong and misleading. “We don’t have any unique quality that can protect us from COVID-19,” he said.

The World Health Organization has also said the consumption of foods like turmeric cannot prevent COVID-19. “There is no scientific evidence that lemon/turmeric prevents COVID-19.  In general, however, WHO recommends consuming adequate fruits and vegetables as part of a healthy diet,” it said.

Two other factors also prove Oli’s claim incorrect. No matter where they live, most Nepalis generally eat Nepali food. But at least 121 Nepalis have died in foreign countries from COVID-19. The food Oli mentioned in his speech is also widely used in the diet of India and China, where a large number of people have died of COVID-19.

Therefore, Oli’s immunity argument is not supported by facts.