In the Rana-era, both hill and tarai people needed passport to visit Kathmandu 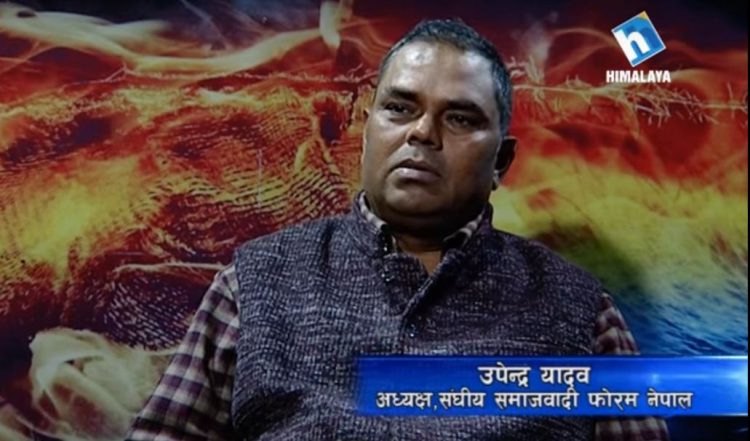 Upendra Yadav, the chairman of the Federal Socialist Forum, Nepal during an interview with the Himalaya TV programme ‘Yaksha Prashna‘ aired on December 2 made the following assertions. South Asia Check has examined whether his assertions are fact-based or not.

After the first Madhes uprising, the government led by Girija Prasad Koirala signed an agreement with the then Madhesi People’s Rights Forum Nepal on September 9, 2007 wherein it was mentioned that federalism will be introduced in Nepal. The agreement has nowhere mentioned about forming one Madhes province for the entire tarai.

Similarly, after the second Madhes uprising, Girija Prasad Koirala-led government signed an agreement with three leading Madhesi parties on February 28, 2008. In that agreement, it was mentioned that “by accepting the Madhesi people’s wish for an autonomous Madhes…Nepal shall become a federal democratic republic.”

In both the agreements, there is no mention of creating one single Madhes province for the tarai.

Therefore, Chairman Yadav is wrong in saying that the agreement reached with Girija Prasad Koirala was for the formation of one province for the entire tarai.

Second Assertion: There was a time when one needed passport and visa to come to Kathmandu from Birgunj. [Madhesis were] treated like foreigners.

Frederich H Gaige, an author who has written a book on tarai, too has mentioned that except on the occasion of Shiva Ratri festival, the residents of the tarai had to obtain passport in Birgunj before visiting Kathmandu. (For detail, read Gaige’s book “Regionalism an National Unity in Nepal” published by Himal Books and translated by Mohan Mainali in Nepali language)

The assertion of Yadav is similar to the information given in the book. Therefore, his assertion is correct.

But the statements of both Yadav and Gaige gives the impression that passport was needed only to the people of the tarai while visiting Kathmandu, which is wrong.

Even the people from Kathmandu had to obtain a passport if they wished to visit other parts of Nepal through Chisapani Gadhi. A founding leader of the Nepali Congress, Ganesh Man Singh, who was from the Newar community of the Kathmandu Valley, has mentioned in his memoir that during the Rana period, he had once tried to flee Kathmandu in the guise of a hill-Brahmin. While crossing the Chisapani Gadhi, he showed a passport issued in his name to the staffers of the Gadhi. “When the staffers of the Gadhi asked me to produce my passport, I flipped open the Chandi [a Hindu scripture] book and showed them the passport which I had kept inside. They thought I was a pious Brahmin and did not enquire further,” he has said in a memoir. (Ganesh Man Singh, Pages of my Life, Part 1, Presenter: Mathwar Singh)

Third Assertion: When the First Muluki Ain was enacted, Junga Bahadur [introduced a system] in which people from lower castes were regarded as Masine Jaat, they could be killed [without fear of penalty], but the people from higher castes [were exempted from the provision].

During the tenure of Junga Bahadur Rana, first Muluki Ain (Civil Code) 1910 was enacted. This Civil Code legalized the discrimination based on Hindu caste system. The Code had categorized Nepali people under the following five groups:

The word “masinya” used in the Civil Code meant “those who can be enslaved”. (For details, read Andras Hofer’s “The Caste Hierarchy and the State in Nepal, A study of the Muluki Ain of 1856” published by Himal Books)

Yadav in his interview has claimed that the word masinya means “those who could be killed”.

Therefore, this assertion is also wrong.