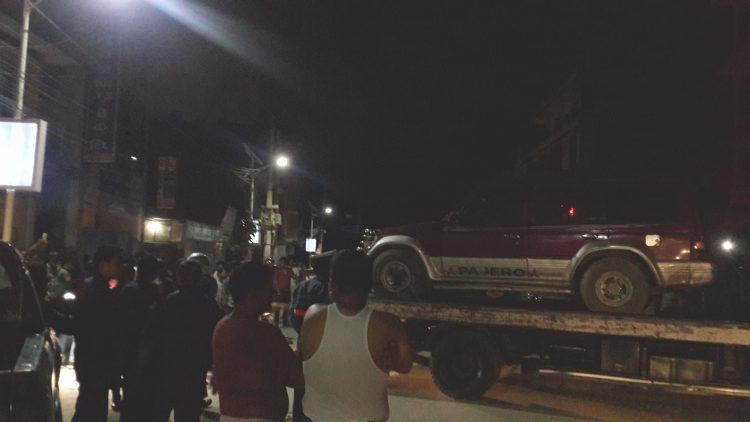 In July 2017, a schoolgirl in Kathmandu drowned after falling into a rain-filled sewer on the road. This became big news. Then came reports that the prime minister had issued express orders to the agencies concerned to cover up the dangerous potholes in the capital’s streets.

Between mid-April and mid-July of this year, 15 children drowned in Siraha, Saptari, Sunsari and Morang districts. Some of the children drowned in the holes dug up during road construction, some died after falling into the pool of water near water taps, some fell into ponds and some into swollen pits of rainwater.

In the eastern development region, at least 56 children died untimely deaths – some were swept away, some were electrocuted, some died in road accidents, some were crushed to death, some had drowned, some were burnt by fire or hot oil, some died in landslides and some were killed by their own parents.

But these deaths were not widely reported in the media. So the prime minister did not know about the causes of these preventable deaths of children and did not issue orders to address them.

The natures of some of these deaths are horrible. On June 22, 2017, two schoolchildren in Solukhumbu district on their way home from school were killed after being swept away by a flooded rivulet. Two children were injured.

Young children do not know that they should not attempt to cross a flooded rivulet, but it appears that their school, guardians and others did not bother to warn the children about the dangers. As a result the children died avoidable deaths.

But among those dying avoidable deaths, children are not alone. During these three months, a total of 222 people including children died and these deaths were preventable to a large extent.

This report does not include the deaths from causes that are difficult to prevent, death from lightning, for example. During these three months 13 people died when they were struck by lightning in the eastern development region. 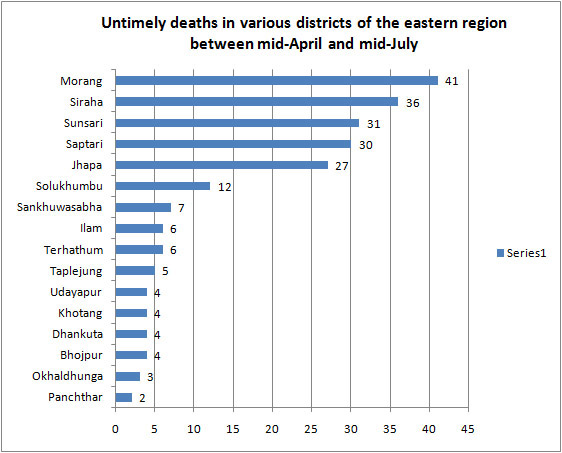 Road accidents were the biggest killer, which claimed 79 people during the period. And electrocution was the second biggest killer, which claimed 36 lives in the eastern region in the three months. Some were electrocuted while drying clothes on the roof, some died while operating the computer printer, some died while using the cell phone on charge and many were electrocuted while using the electric water pumps. 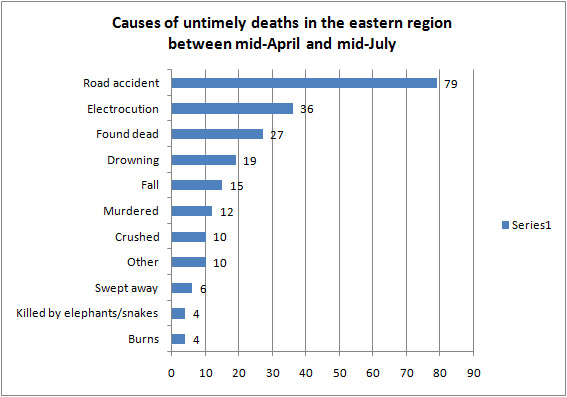 The issue of untimely deaths is serious. The reasons behind many of these deaths still remain a mystery. A total of 27 persons died untimely deaths due to unknown reasons.

Simple precautions can prevent death from altitude sickness but several people died from this condition in the eastern region. People have also died when they went to grind grain at the local mills. This is unusual. Humans should not kill other human beings. But 12 people were murdered during this period.

It appears that our society does not take unnatural deaths seriously. And there seems to be reluctance on the part of the relevant stakeholders to disseminate information about these deaths. While preparing this report, we studied the websites of all five regional offices of Nepal Police. But none of the regional offices other than the eastern region had put up such information in an easily accessible manner.

Statistics on the growing cases of untimely or avoidable deaths are seldom analyzed. So I have mentioned a few paragraphs from the introduction of my book, “Investigative journalism: What why and how”.

“A few years ago, Nepali doctors found that many Nepalis were dying untimely deaths. And the facts came as a shock to them. They took the issue so seriously that the editorial of the April-June 2008 issue of the journal published by the Nepal Medical Association focused on untimely deaths.

“They were shocked by the figures maintained by the Forensic Medicine Department at the Tribhuvan University’s Teaching Hospital. In the three months between mid-April and mid-July of 2008, police brought 300 bodies to the department for autopsy. Of these, 57 bodies were found unattended, 47 bodies belonged to those killed in road accidents, while 88 had committed suicide. Likewise, 38 had either drowned or died of burns. Some died sudden deaths and some died after falling from heights. Some had died in the course of treatment. Some had been beaten to death. Some died of electrocution. The police also found some skeletons of people who had died some time ago.

“Normally, the bodies of people who die natural deaths are not taken for autopsy. The statistics maintained by the department show that around 100 people on an average die unnatural deaths every month in Nepal and this takes the annual figure to 1,200 unnatural deaths.

“Let’s compare this figure with the number of unnatural deaths that occurred during the Maoist insurgency. It is said that 13,000 people died in the decade-long insurgency. The annual average comes to 1,300 deaths. But even after the insurgency, nearly the same number of unnatural deaths have been occurring in the Kathmandu Valley alone. If we consider similar deaths across the country, this number would be higher.

“The journal’s editorial has stated that disregard of traffic rules is the major reason for road accident deaths. This means, if people follow the traffic rules, the number of such deaths can be reduced. If the people with suicidal tendencies are provided timely psychiatric care, then suicide cases will also come down. If the people who have consumed poison receive emergency medical attention at big hospitals, many such people could be saved.

“The  number  of  deaths  from  burns,  drowning,  falls  from  heights  and  electrocution can also be prevented to a large extent if the society is more educated, health conscious and informed about work-related hazards, says the editorial.

“The doctors also felt that untimely deaths could be reduced by raising awareness about the issue among the public. And the editorial urged the doctors to think about ways to improve the situation.

But, those who raised these issues did so infrequently. And some did not raise them even after learning about these issues. And those who attempt to raise such issues face non-cooperation.

For instance, South Asia Check had two years ago attempted to examine if there had been any improvement in the situation mentioned in the journal of the Nepal Medical Association. When South Asia Check approached the Forensic Medicine Department at the TU Teaching Hospital, they refused to provide us the information. The doctors there thought we were committing some kind of crime by seeking such information.

As a result, many people still die preventable and untimely deaths. But it appears that time has yet to come for our prime minister to issue orders to obviate the preventable causes of deaths.