Income of the political parties

“Politics is not a profession, but service. The party calls upon all its cadres to see politics as service and be self-dependent by associating themselves with the production system and cleanse politics.”

Two years after the CPN-UML made the aforementioned declaration in its election manifesto for the Constituent Assembly elections 2013, Rajyalaxmi Golchha, a lawmaker from the same party, complained that she had repeatedly paid donations to the CPN-UML and its leaders.

During the Constituent Assembly elections, the CPN-UML had, just like the Nepali Congress and the UCPN (Maoist), said that it would accept donations only through bank account. Golchha has revealed that UML leaders were reluctant to accept checks so she had to pay the donations in cash.

After this revelation, the issue of income and expenditure of political parties and their leaders has once again become the subject of public discourse.

The issue that the political parties and political leaders should be clean was raised from the time of formation of the interim government after 1990. That interim government in its policy directives announced in June 1990 had said: All kinds of corrupted and miscreant individuals will be punished.

Wasti noted, “If the ministers and former ministers accumulating illegal wealth are liable to punishment, why should the political parties engaging in similar illegal activities be spared? What’s the harm in admitting that a political party set up with good intentions, should follow righteous path to achieve its goals?”

The summery of his article was that the political parties and politicians should not engage in shady financial transactions.

But 25 years after the start of this debate and political upheavals, the financial transactions of the political parties and politicians remain opaque. They are not clean and untainted.

Money is vital for running a political party and for mobilizing the cadres. For this, some political parties raise funds in the form of membership fees from cadres and some parties collect a certain amount from the salaries of their lawmakers. But the funds collected from such visible sources are not enough to run the parties.

In many countries, the state provides funds to the political parties so as to ensure that they don’t have to accept illegal and opaque donations. In Nepal also, attempts had been made to introduce similar arrangement, so as to provide political parties with funds from state coffers for fighting elections. The then finance minister Prakash Chandra Lohani while announcing the budget for the fiscal year 2003/04 had said: “I have made an arrangement to provide the nationally recognized political parties grants at the Rs 20 per vote obtained in the immediately preceding parliamentary election.”

While attempting to justify the move, he had said, “A corruption-free society cannot be imagined until and unless the corruption at the political level is not stopped. Seeds of corruption start to germinate when donations are collected in unhealthy and opaque manner for the purpose of fighting elections. In order to free the political parties of the possibility of collecting funds through opaque means, the government has introduced a provision to provide the parties with funds ahead of the elections.” 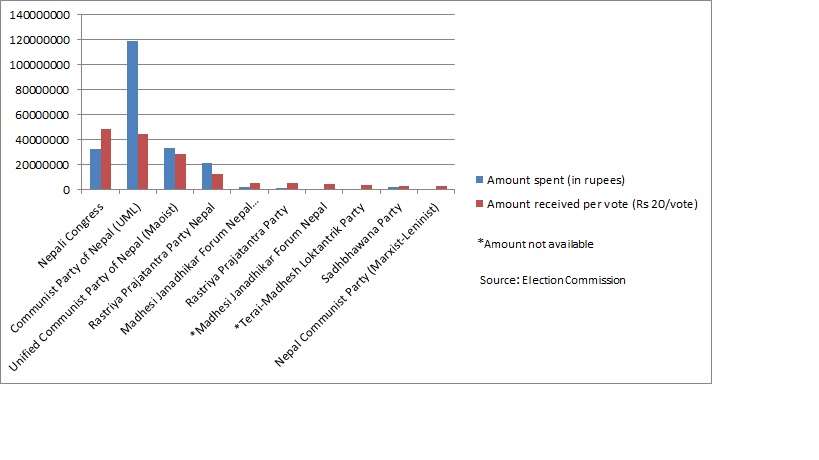 Lohani, in the budget speech, also said, “All political parties will be required to have their income and expenditure details and balance sheets audited through a senior chartered accountant, who is a member of the Nepal Chartered Accountants Association, and make them public every year.”

Lohani also proposed a provision whereby the companies running on profit could publicly donate up to Rs 5 million to nationally recognized political parties two months before the elections and include the donation as expenditure in their account books for income tax purposes.

But this proposal went unimplemented.

“I remained finance minister for just 11 months, so I could not implement it. Also, the opposition parties protested the proposal terming it a ploy by regressive forces to sabotage democracy,” Lohani told Southasiacheck.

There was no parliament during that time. Five political parties including the Nepali Congress and CPN-UML had launched an agitation against the government. They were opposed to this provision of the budget.

A joint statement issued by the five parties said, “At a time when the government revenues are not enough to meet the recurrent expenditure of the country, the decision to provide state grants to political parties is irresponsible.”

A Kantipur report headlined “Five parties announce to reject fiscal budget” published on July 21, 2003 quoting Mahat had said, “The situation is such that the government needs foreign loan even to meet the recurrent expenditure. So, there could be nothing irresponsible than make a decision to provide grants to the political parties by borrowing more. …This kind of imitation of the UK is similar to the saying “Nepali horse, British neigh.”

The opaque expenditures of the political parties and their leaders can be reduced by imposing a limit on election expenses. The Election Commission has set Rs 1 million as the electoral expense limit per candidate. The candidate is required to submit details of his/her electoral expense details to the Election Commission. Most of the candidates have been submitting such details, but the candidates themselves admit that the details submitted are not real.

“None of the election expense details submitted to the Election Commission are real. Is Rs 1 million enough to run the election campaign? When I contested from Gorkha for the first time, it cost me Rs 600,000. When I contested the elections for a second time, I found that the real electoral expenses are many times higher [than the limit set by the commission].  They were well beyond my affordability. Even after support from friends, I was hard-pressed. Looking at the campaign expenses of candidates, I found that Rs 1 million is largely insufficient. But we are lying to everyone,” Baburam Bhattarai told the BBC Nepali service in an interview aired on October 28, 2015.

The political parties are required to submit their annual income and expenditure details to the Election Commission. Many parties have been submitting such details. But, after Bhattarai’s admission, it can be said that the details may not be real.

Also, the income sources of political parties remain undisclosed. Now, the Rajyalaxmi episode has given hints of CPN-UML’s income.

During the Constituent Assembly election in 2013, media reports shed some light on the income of the UCPN (Maoist). A report published in the New York Times had quoted UCPN (Maoist) leader Hisila Yami thus,”People gave us money earlier out of fear, but they don’t do that now. We have to be appealing now. We have to be nice. We can’t afford to antagonize people now.”

Very little is known about the sources of funds of the Nepali Congress. It is widely believed that all the political parties sold their proportional representation seats in parliament, but there is no evidence to show whether this is true or false.

Since their incomes are not transparent, it is said that the political parties work in the interest of their donors and sponsors, and compromise values, ethics, morality and public good.

“I have seen the party chiefs facing huge shortage of funds during the elections. So they have to arrange funds through whatever means possible. They need to ask for funds from industrialists, businessmen and even foreigners and they are always burdened by the gratitude, because no one gives money for free. As a result, such small groups influence the policy formulation process of the country. That’s why, with the intention to place the big parties on moral high ground, I had brought the proposal to provide sufficient funds to the political parties. If this happens, a party’s candidate does not have to please his party chief to get funds. Everything will go as per the process,” Lohani said.

The CPN-UML during the CA elections in 2013 had revived this concept. The party’s election manifesto said, “The party will take active initiatives for making arrangement of state grants for political parties on the basis of the votes garnered and for ending the situation whereby politics is run through opaque economic relations.”

But no one has seen the party working toward that end.

The bill has yet to be drafted.

(In association with Sujit Mainali and Bhrikuti Rai)