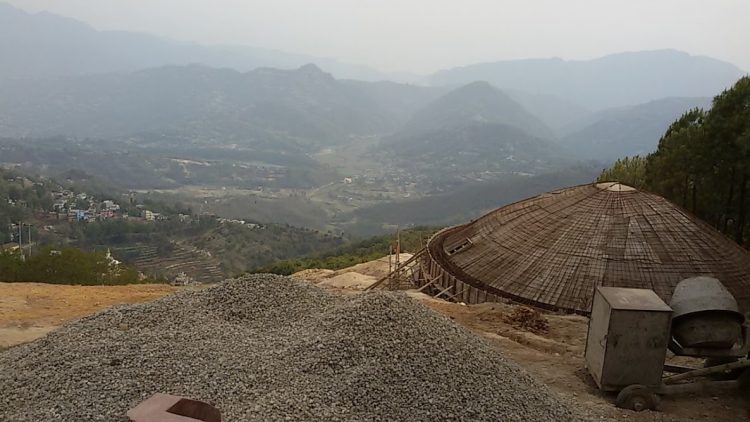 It’s already 10 pm at Tansen Bazaar in Palpa. Normally at this hour, everyone should be at home. But at the stone water spring at Narayanthan in the bazaar, elderly, children and youths have formed a long queue. They have placed their water vessels and jerry cans among other pots in the queue.

“This spring gets rest for just three hours at night — between 12 am and 3 am,” Keshavlal Shakya, the chief of the Drinking Water and Sanitation Division Office, Palpa, said. Within three hours of those individuals who filled up their vessels at night going to bed, others who had slept early the previous day start forming a queue at the spring.

During daytime only those who manage to take out time from their office or work come here for water. They also have to line up for water, but the queues during the daytime are not longer as those at night.

Tansen is among the hill towns that have long been reeling under water shortage.

According to Tansen Drinking Water Consumers Committee Chairman Chakorman Shakya, Tansen needs 2.5 million liters of water per day. But during the dry season, the supply dwindles to 700,000 liters. “We are 1.8 million liters short every day,” he said.

Most water sources in Tansen are either drying up or are in a bad shape. “It has not rained yet. So the springs have dried up. The Nisan Dhara [a spring] has dried up. Nisan Dhara would provide some water till May. But this time it dried up in April. Even the water flow at the Narayanthan spring has decreased,” Chairman Chakorman Shakya said.

According to the Drinking Water and Sanitation Division Office, Palpa:

The acute water shortage in Tansen is also due to the growth in population. “When the drinking water project in Bhulke was launched, Tansen had a population of 12,000. But now there are around 30,000 people including permanent and temporary residents. There has been no major addition to water sources, but the demand has been constantly increasing,” Keshavlal Shakya, the chief of the Drinking Water and Sanitation Division Office, Palpa, said.

The rise in demand is also partly due to the change in lifestyle. Says Chairman Shakya of the Tansen Drinking Water Consumers Committee, “Consumption of water has risen. Nowadays the toilets have flush system. And people nowadays take bath more often. Previously, a house had just one toilet, but now there is one per room.”

All but one small water source feeding Tansen lie at lower elevations than the town. The water has to be pumped up using machines. For this, regular power supply is needed. But the Butwal-Tansen power line has become so dilapidated that even a gust of wind causes power outage. According to the Nepal Electricity Authority, on April 5, Tansen saw 10 power outages within 24 hours. And between April 5 and 6, there was a continuous power outage for 15 hours. Sometimes there is power outage for up to three days.

During power outage, the water supply system is also disrupted. The Tansen Drinking Water Consumers Committee instead of supplying water, issues a notice through FM radio: “We are unable to supply water due to power outage.”

“Previously we would supply water every 2-3 days. But now we are unable to do so,” treasurer of the consumers committee, Bhimsen Karki, said.

Most of the people here now rely on 14 stone water springs including Teen Dhara, Pahare Dhara, Pol Dhara, and Holangdi Dhara among others.

“Just as an ambulance is a must-have for a hospital, any hotelier in Palpa must have a water tanker,” Ram Prasad Gyawali of White Lotus Hotel said. “We have to bring water from some 14 km away.”

In an attempt to ease the water shortage, a tube well was drilled last year in Prabhas, which lies below Tansen. Also there was a plan to drill another tube well in the Madi plains. According to the Drinking Water and Sanitation Division Office, the two tube wells could supply 900,000 liters a day.

But the farmers nearby the planned tube well site blocked the project arguing that the tube wells would render the area dry and prevent them from irrigating their crop fields.

But bringing the water of the Kaligandaki River to Tansen is not easy. The river’s water has to be lifted about 1,074 meters. And this has to be done in five steps. In other words, it has to be lifted using five pumps. And all five pumps need to be operated for 18 hours daily.

The project will cost Rs 280 million to complete. And the water from the project will cost Rs 30 per 1,000 liters. At present, Tansen Drinking Water Consumers Committee charges its consumers Rs 150 for 10,000 liters. The committee charges this amount only if it is able to supply 10,000 liters a month per household. Once the Kaligandaki River project is completed, the cost of water will double.

According to committee treasurer Karki, they mulled increasing the water tariff starting mid-July but are still undecided because currently there is not enough water to supply.

Even now the committee’s monthly tariff covers only half of the cost of supplying water. “We have to pay Rs 1.1 million per month in electricity tariff alone,” consumer committee chairman Chakorman Shakya said.

The then finance minister Ram Sharan Mahat in the budget for the fiscal year 2014/15 had stated: “The source of water is drying day-by-day due to climate change. I have managed to exempt all demand charge of electricity used in the pumping system for providing drinking water.”

“Currently, we are praying that the government does not change. If we are able to start the project this year, it could be completed in 2-3 years,” Chakorman said.