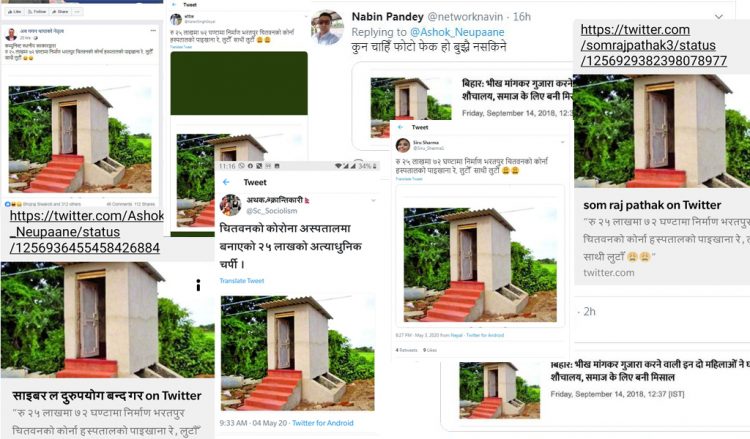 A collage of social media posts with the photo of the toilet-like structure.

On May 3, Twitter users began sharing a picture of a small toilet-like structure with what appears like a corrugated cement roof and a colored stairway. Also there are two compartments at the base of the structure. The structure appears to be standing beside a tree and a bushy undergrowth. Twitter user @Ashok_Neupanne shared it claiming that the toilet was built at a cost of Rs 2.5 million by the Corona [COVID-19] Hospital in Bharatpur, Chitwan. Neupane shared it at 7:04 pm on May 3. The post, which was in Nepali language, read: “This is reportedly a toilet of the Corona Hospital of Bharatpur built in 72 hours at the cost of Rs 2.5 million.” 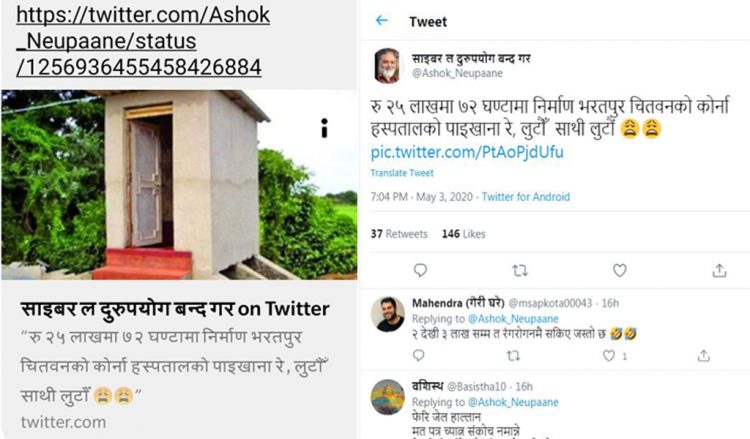 On May 3, Twitter user (@Ashok_Neupaane) shared this photo saying it is reportedly a toilet built at Bharatpur’s coronavirus hospital at the cost of Rs 2.5 million.

Another twitter user @somrajpathak3 also shared the photo and the text but later deleted it.

The picture was also posted on a Facebook fan page of Gagan Thapa, a Nepali Congress lawmaker, and the Facebook post had already been shared 120 times until Tuesday afternoon. 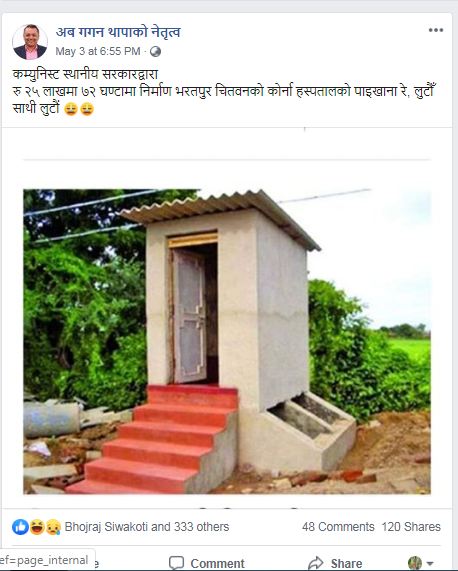 This photo posted on a Facebook fan page of Nepali Congress leader Gagan Thapa had already been shared 120 times until Tuesday morning.

The photo is being circulated in the wake of allegations of theft of medical supplies at the hospital, which was built especially for treating those infected by or suspected of being infected from the coronavirus. The anti-corruption watchdog, the Commission for the Investigation of the Abuse of Authority, on April 28 had raided the hospital after CCTV footages showed staffers stealing medical equipment from the facility.

Some Twitter users deleted their posts after suspecting that the ‘toilet photo’ might be fake while some users have shared a social media post dated September 14, 2018 and containing the same picture claiming that it is a toilet built by two mendicant women on their homestead in India’s Bihar state.

Twitter user @networknavin questions the authenticity of the photo.

South Asia Check examined the photo and its origin.

We did a reverse image search on Google and found that the image was from the Indian state of Gujarat. We found that India West, a news website catering to the Indian diaspora in the US, was one of the first websites to publish the photo. It published the photo along with a news report titled ‘Excess fund from Modi’s US visit to be used for building toilets’ on Jan 16, 2015. “An ecologically-sanitary public toilet in rural Gujarat separates urine and feces, which are sterilized to be used as fertilizer,” reads the caption.

The image is credited to the Indian Ministry of Rural Development. So it is not the toilet of the Bharatpur COVID-19 hospital.