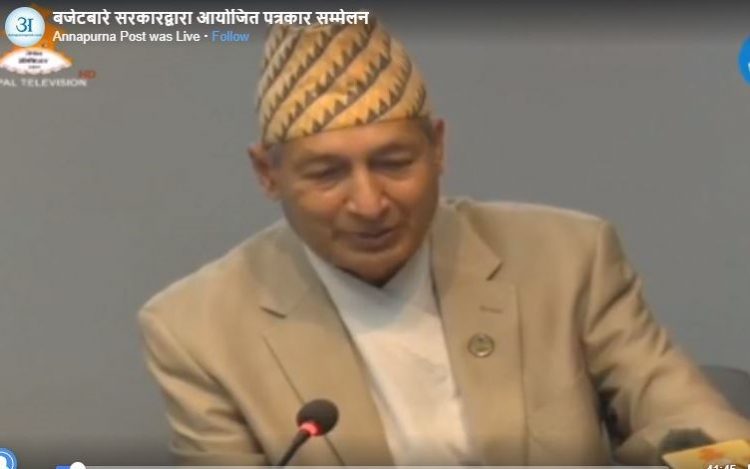 Finance Minister Yuba Raj Khatiwada speaking at a post-budget press conference in Kathmandu on May 29.

On May 28, Finance Minister Yuba Raj Khatiwada unveiled a budget of Rs 1.47 trillion for the fiscal year 2020/21 in the Federal Parliament. Citing the COVID-19 pandemic, the budget was downsized by 3.8 percent from last year’s 1.53 trillion.

On May 29, a day after presenting the budget, Finance Minister Khatiwada, who also serves as the government’s spokesperson, held a press conference at the Ministry of Finance in Kathmandu. He spoke about various aspects of the budget during the 45-minute press conference.

In the course of his presentation, Khatiwada spoke about the budget allocation for the health sector and income tax rates in Nepal. While talking about the two issues, he made false and misleading claims.

According to the expenditure estimates of this year’s budget, a total of Rs 115.06 billion has been allocated for the health sector. In 2019-20, this amount was Rs 78.40 billion. And in the fiscal year 2018/19, health sector received Rs 65.34 billion. Khatiwada was right when he said this year’s allocation is a third more than last year’s but he was wrong to claim that the allocation has doubled in the last three years. For this he should have allocated Rs 130.68 billion for the health sector. In other words, he should have allocated an additional Rs 15.62 billion.

In an article published on news website www.onlinekhabar.com, Rup Khadka, who headed the High Level Tax System Review Commission, set up to recommend reforms in Nepal’s tax system, said Nepal’s income tax rates were among the highest in South Asia. “Nepal’s average personal income tax rate is much higher than any other SAARC (South Asian Association for Regional Cooperation) country. This is not good for the country’s economic growth. The tax burden should be fixed comparatively,” he said, adding, “Since Nepal is a landlocked country with relatively small economy, from the viewpoint of economic development it is not appropriate for Nepal to impose taxes higher than that of India, Pakistan and Bangladesh.”

After a comparative study of the income tax rates of South Asian countries and based on the comments of a tax expert, we have concluded that Finance Minister Khatiwada’s claim that Nepal’s income tax rates are competitive in South Asia is also false.