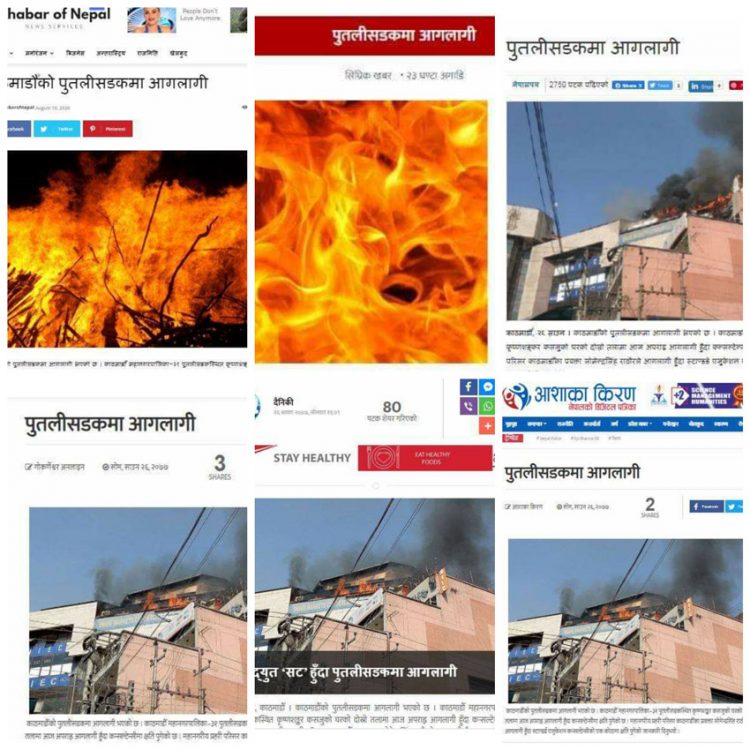 .         A collage of news reports on the August 10 Putalisadak fire. Some news websites misleadingly used a two-and-a-half years old photo to depict the August 10 fire.

A fire broke out at the office of Standard Education Consultancy in Kathmandu’s Putalisadak area in the afternoon on August 10. The fire occurred at the consultancy’s office on the second floor of a three-story building owned by Krishna Shankar Kasaju.

The fire was caused by a high-voltage fault and caused some property damage, according to reports. The locals had informed the police about the fire and it was brought under control by firefighters. Several news websites have carried the news of the incident on the basis of a report prepared by the state-run National News Agency. The news websites also published photos of fire along with the news. Some of them have identified the photos as file photos or representative images. But some news websites have published a photo of a fire that occurred in a nearby commercial complex two and a half years ago. Archived links to the news can be accessed here, here and here.

Several news websites have published an old photo of a fire that broke out at Share Market Complex at Putalisadak almost two and a half years ago, on February 26, 2018, in an apparently misleading manner.

The site of the 2018 fire is about 20 meters from the site of the August 10 fire. Reports at the time suggested that the fire was caused by a cooking gas leak. Firefighters from the police and army had doused the blaze at Nepal International Education Consultancy on the fifth floor of the Share Market Complex.

See this also: Old photo being circulated as that of recent Chepang settlement fire