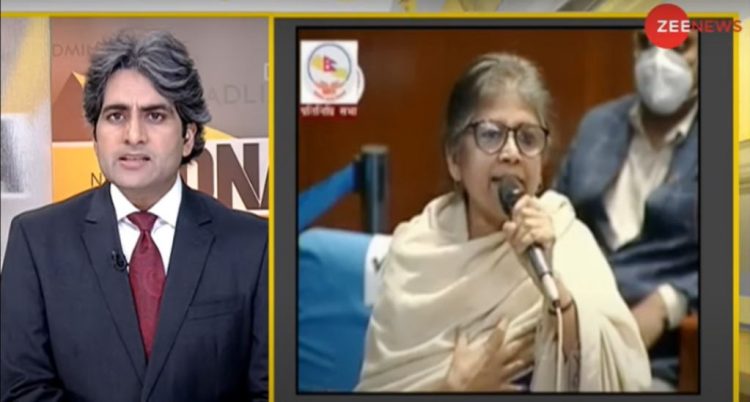 In a current affairs show, DNA (Daily News and Analysis), broadcast on July 7 on Indian TV channel Zee News, Sudhir Chaudhary, the show host and the channel’s editor-in-chief, commented on the recent political developments in Nepal after Nepal’s parliament unanimously endorsed a bill to amend the national emblem. This followed the release of a revised political and administrative map by Nepal by including territories in Nepal’s northwestern region, which are currently under Indian occupation. In the context of the actions taken against Janata Samajwadi Party’s member of parliament Sarita Giri, who protested against the new map, Chaudhary said:

“A few days ago, Nepal issued a new map claiming three territories of India as its own. And, the map has been endorsed by both the houses of the federal parliament of Nepal. But a decision has been taken to expel the only MP [member of parliament] who opposed the new map from her party and parliament. Sarita Giri is the MP’s name. Sarita Giri is an MP from the Samajwadi Party of Nepal. Sarita Giri’s fault was that she protested against the new map. And, she argued there is no basis for including Lipulekh, Limpiyadhura, and Kalapani of India in the map of Nepal. But the government of Nepal couldn’t accept this fact, for which Sarita Giri had to lose her position as a punishment for speaking the truth.”

The constitution amendment bill to revise the national emblem of Nepal to include Limpiyadhura, Kalapani, and Lipulekh in the map was passed by both houses of the federal parliament and ratified by the president on June 18. As it was a matter of national sovereignty, the government, the main opposition, and all parties voted in favor of the revised map. But Janata Samajwadi Party MP Sarita Giri had openly protested against the issue. She opposed the new map stating that Nepal, before issuing the revised map, had not communicated with its two neighbors India and China. Also, speaking last month on the “Janata Janna Chanchhan” program on Prime Times TV, she had said that would not accept that Limpiyadhura belongs to Nepal.

After the government brought a bill to amend the constitution to change the map of Nepal on the national emblem, Giri had registered an amendment to the government bill. But Speaker Agni Sapkota rejected Giri’s amendment proposal. And the Janata Samajwadi Party took the action against Giri after she refused to withdraw her amendment proposal ignoring the party’s instructions. Stating that Giri had violated the party’s directives and whip, the party formed a three-member inquiry committee on June 22. Mohammad Istiyak Rai, secretary of the Janata Samajwadi Party, said the committee had sought clarification from Giri and submitted a report to the party. 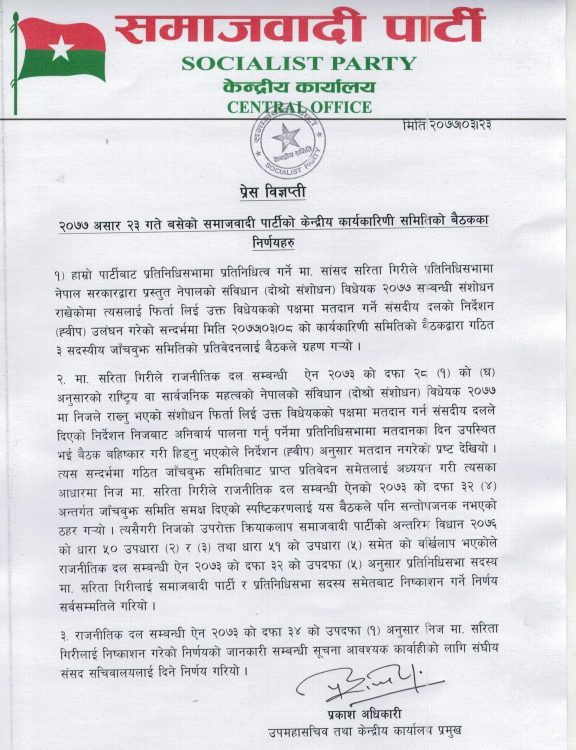 A statement of the party informing about the expulsion of Sarita Giri from parliament and the party.

The Janata Samajwadi Party, which is currently in opposition, issued a press release on July 7 stating that Giri had violated the party’s directive by not voting in favor of the government bill in the House of Representatives and her clarification submitted to the inquiry committee was not satisfactory. The statement said her action was against the Interim Statute of the Janata Samajwadi Party 2076, therefore she was expelled from the House of Representatives and the party.

Based on the party’s statement, Sudhir Chaudhary’s claim that Nepal government had a role in sacking Giri from parliament and her party is erroneous.

Similarly, another Indian YouTube channel called ‘Headlines India’ has also presented misleading details saying that Prime Minister KP Sharma Oli revoked Giri’s parliamentary membership because of her speech in the parliament. The channel with more than 5 million subscribers had uploaded a video about Sarita Giri on July 8. The video has already been viewed more than 188,000 times until Saturday afternoon.