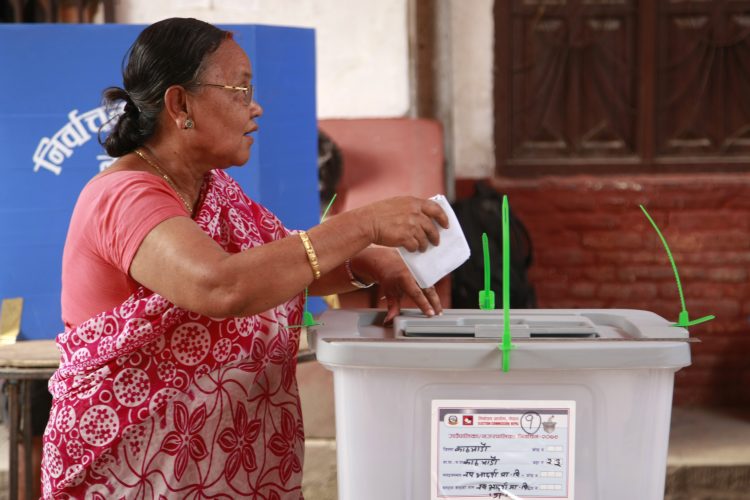 The Nanimaya episode: Nanimaiya Dahal was elected to the then Rastriya Panchayat from Kathmandu in the 1981 elections. According to the Gorkhapatra of May 15, 1981, she had secured 65,777 votes. Jogmehar Shrestha, the other candidate elected alongside her from Kathmandu had secured 29,741 votes.

At that time, a district was an electoral constituency, and big districts including Kathmandu elected two members each while others elected one each.

There was a clear agreement among the public that Nanimaiya Dahal was not fit from any angle to become a lawmaker and she had not made any contribution to the pro-Panchayat or anti-Panchayat politics or the social sector.

Currently, some politicians and members of the public have made the following type of statement on the social media and traditional media: Kathmandu’s voters characteristically cast their votes in favor of candidates like Nanimaiya, who are unfit and have no contribution of any kind, and in the recently-concluded local elections in Kathmandu and Lalitpur, they demonstrated the same characteristics.

But in order to understand why Kathmandu’s voters elected Nanimaiya in the 1981 elections, one has to understand the political circumstances of that time.

After the multiparty system was defeated in favor of the existing partyless Panchayat system in the 1980 national referendum, a sense of hatred against the Panchayat system had become widespread among the supporters of the multiparty system. And, under the one-party rule, there was no way to vent this hatred. So they took the Rastriya Panchayat elections held just a year after the referendum as an opportunity to express their dissatisfaction with the system. So they used the elections to send the message that the Panchayat system was unfit to rule over the people.

After the restoration of multiparty-democracy in 1990, voters from Kathmandu’s electoral constituency-1 defeated Krishna Prasad Bhattarai twice: First in the parliamentary elections in 1991 and then in the by-election in February 1994 [after the death of Madan Bhandari].

In the 1991 parliamentary elections, Kathmandu’s voters defeated Krishna Prasad Bhattarai by giving 743 more votes to Madan Bhandari, the candidate from the CPN-UML.

Krishna Prasad Bhattarai was the prime minister of the interim government, which had successfully conducted the parliamentary elections in 1991. Despite the difficult circumstances, he had facilitated the promulgation of the 1990 constitution and done other commendable jobs.

Bhattarai’s rival in the 1991 elections, Madan Bhandari was no less formidable. He was an articulate orator, who could easily attract voters. And he was backed by the influential party organization of the CPN-UML. During the time, even temporary voters could cast ballots. So how can one criticize Kathmandu’s voters when Madan Bhandari used all these to his advantage and won the elections?

After the death of the CPN-UML General Secretary Madan Bhandari in Dasdhunga of Chitwan, by-election was held in Kathmandu’s constituency-1 in February 1994. In the by-election, Krishna Prasad Bhattarai of Nepali Congress and Bidya Bhandari of the CPN-UML were the top candidates. According to Gorkhapatra of February 9, 1994, Bidya Bhandari won by securing 1829 more votes than Krishna Prasad Bhattarai.

Bidya Bhandari was not just the wife of the late Madan Bhandari but also a devoted worker of the CPN-UML. Also, people had sympathy for her as her husband had died in mysterious circumstances. But these are not the only reasons for Krishna Prasad’s loss in the elections. His own party was actively involved in defeating him.

A week before the by-election, Nepali Congress’ influential leader and Prime Minister Girija Prasad Koirala issued a wordy statement, in which he said: “…While Kishunji had been saying all the time that he was not interested in fighting elections, he felt forced to contest as a candidate for the sake of someone else. I had in the very beginning expressed my disagreement saying it is not appropriate for Kishunji to contest the elections as this would put the government, our party and us in a difficult situation.”

(Full text of this statement was published in the Gorkhpatra on January 21, 1994 and excerpt in Kantipur daily of the same date.)

Maybe the voters did the right thing by not voting for someone who, in the eyes of the most influential leader of the country’s largest party and prime minister, was an “uninterested” candidate, whose candidacy was “ill-timed” and would put the government, party and us in a difficult situation.”

After the by-election, journalist Kishore Nepal in his column in Kantipur daily of February 13, 1994 wrote: “It has now become clear that the outcome of the elections of Kathmandu Constituency 1 would not have gone against the Nepali Congress had the various elements in the Nepali Congress which regard Krishna Prasad Bhattarai’s very entry to parliament as the beginning of their end, and worked against him in unison.”

According to a news report published in Kantipur daily of February 11, 1994, after the election results were published, more than 56 Nepali Congress parliamentarians identified “antarghat” [betrayal by own party] for Krishna Prasad’s loss in the election and expressed their “deep regrets”.

The Kathmandu district committee of the party suspended some of its workers on the charge of betraying their own candidate. Workers of the Nepali Congress and its student wing, Nepal Students’ Union, staged demonstrations against the prime minister for over a week.

From all these, we can say that it is not appropriate to berate Kathmandu’s voters as unfit. To those who always find fault with others, Urdu poet Ghalib has said:

The dust was on my face, but I kept wiping the mirror