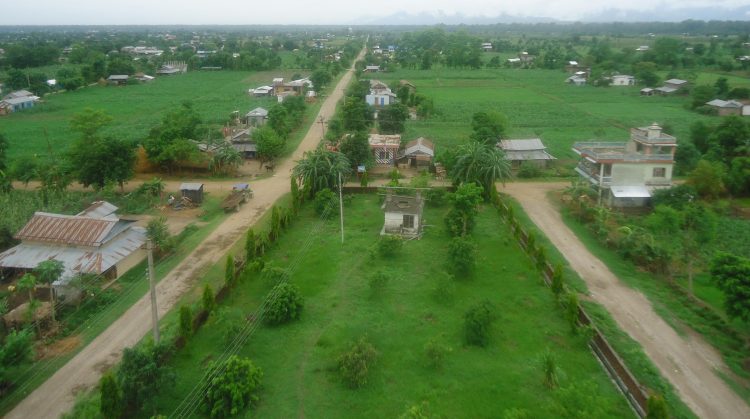 Where will these people go? What will happen to them?

Although it is difficult to tell what will happen to the evictees, if we study previous cases of the people evicted in similar manner, we can to some extent predict their future.

Earlier, 3,500 people had been evicted from their 450 homes and 203.5 hectares of land for developing the Kulekhani Hydropower Project.

In 1985, Jagadish [Chandra] Pokharel had done a study on the people displaced by the Kulekhani project. He wrote the following about the Kulekhani-displaced people in Himal fortnightly magazine in 2048 BS: “The displaced people were told to relocate to a remote location in Bara district. They refused to go there, but were not given any alternative…With the money received as compensation, they headed south to Makawanpur. But the word had already spread to Makawanpur even before they reached there and the land prices rose up to six times within a matter of days…the displaced fell prey to rapacious land dealers, and most of them lost whatever money they had running around from pillar to post.”

The government has not given land for land option to the evictees of Arun III and Budhigandaki projects. Those displaced by Arun III have already been paid monetary compensation. And, preparations are on to provide similar cash compensations to the Budhigandaki-displaced.

Asare Bahadur Rai of Pathibhara in Sankhuwasabha district who lost his land to the Arun III project told IBN dispatch, a publication of the Investment Board Nepal (IBN), this: “I am planning to buy a house here in Khandbari, and land for big cardamom farming.”

But the word about “money-laden land buyers” will reach Khandbari before Asare reaches there. And the land prices will soar rapidly overnight. Something similar will happen to the people displaced by the Budhigandaki project. And there is a fear that the people displaced by these two projects will meet a similar fate as that of the Kulekhani evictees. There has not been any effort to prevent them from falling prey to greedy land dealers and finally ending up penniless.

After distributing compensations to the Arun III evictees, IBN had conducted classes for them in Sankhuwasabha on how to spend the money prudently.

If the person receiving compensation is used to handling money, then he will spend it wisely; he might start some business. But people less used to dealing with money are very likely to lose all their money. Some of the Kulekhani evictees had quickly squandered all of the compensation money.

According to Pokharel, after the Kulekhani evictees suddenly came into possession of huge sums of money, it got frittered away. He has given an example: “A naive Tamang lad received Rs 6,500 as compensation for his land. He came to Kathmandu and lost all the money in gambling. He then started to work as a dishwasher at an eatery in the capital. Two other youths of entrepreneurial disposition but not used to handling money, jointly bought a truck and soon turned bankrupt. Many others squandered all their compensation money on booze and gambling.”

Asare Bahadur Rai of Pathibhara in Sankhuwasabha had told the IBN Dispatch that he was planning to buy a house in Khandbari and land for big cardamom farming. “I will spend some money for better education of my children. Besides, I want to build a public structure in memory of my late father. After all, I would not have been able to receive this much amount had my father not worked hard for us. I will put the remaining amount in bank for future,” he told the IBN Dispatch.

Apart from the money spent on cardamom farming and children’s education, other expenses are non-productive. And the money deposited at stingy banks, which offer very low interest rates, gradually loses value in real terms.

Here, it would be contextual to quote Frederick H Gaige, who had closely watched Nepal’s resettlement program. In his book titled “Regionalism and National Unity in Nepal”, Gaige has said: “The success of the Israeli-sponsored projects can be largely attributed to the loan of Israeli resettlement administrators to the Nepalese government. Without such personnel, resettlement funds tend to be invested unwisely. These funds and the land itself tend to fall into the hands of local vested interests.” 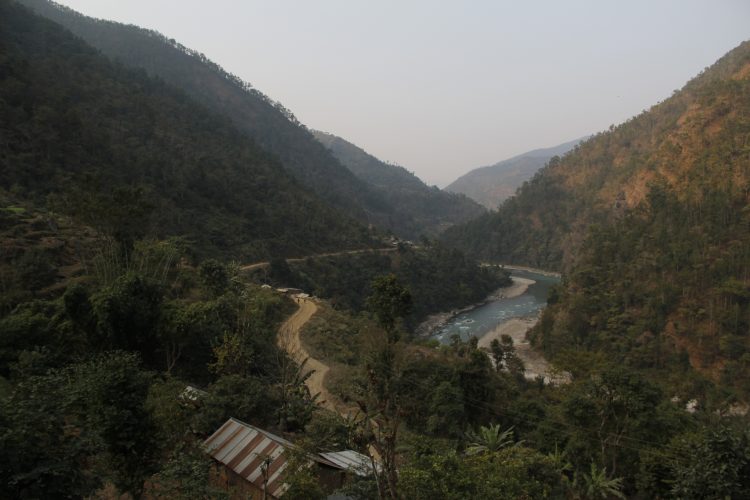 With regard to the evictees of the Arun III and Budhigandaki projects, the government has said that it will first pay compensations and later bring the resettlement program. This means, no efforts have been made to prevent the compensation money from falling into the hands of swindlers.

The international norm regarding resettlement of the people evicted by development projects is that efforts should be made to uplift their living standards and if that is not possible then it should be ensured that their living standards do not decline compared to the situation prior to their displacement.  But the conditions of the Kulekhani evictees declined. According to Pokharel, “The condition of the evictees who moved to Chisapani to the northeast of Hetauda is worse off than that of other evictees. “With the compensation money, they could afford to buy dry and unproductive land that could give just one crop a year.”

Most of those facing displacement due to the Arun III and Budhigandaki projects do not own much land. So they are more worried about the future. In December, Punte Kumal of Majhitar, Dhading, told Bhrikuti Rai of South Asia Check: “Since we would not be able to buy new house and land from the compensation money, it would be better if they relocated us Kumals to the fringes of the Chitwan jungles,”

And it is certain that the voices of the evictees like Punte will go unheeded. 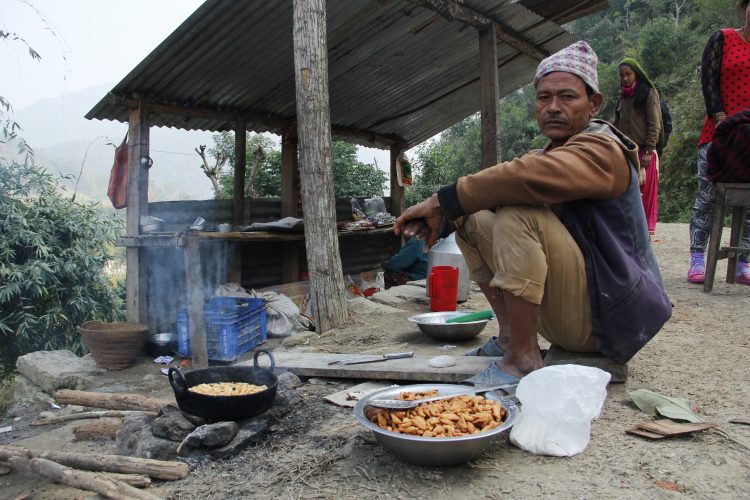 Punte Kumal of Majhitar, Dhading sells food on the side of the Prithvi Highway. The picture was taken in December 2016.  He is set to lose his house and land to the Budhigandaki Hydropower Project.        Photo: Bhrikuti Rai

Pokharel has described what misfortunes did the Kulekhani-displaced meet with. “Most of the evictees moved to low-yielding barren lands on the fringes of Hetauda. They lost their social standing and were cut off from their relatives and communities, and their traditional skills were of no use in the new place. They are in despair, unable to stop thinking about the fields and the hills that they left behind…Those who resettled here are in poorer conditions compared to their past.”

Pokharel later went on to become Dr Jagadish Chandra Pokharel. He also served as the vice-chairman of the National Planning Commission. Pokharel has also studied the conditions of the people displaced by other development projects.

In an interview with IBN Dispatch in March 2016, he said: “In the Kaligandaki Hydropower Project, the Bote people, who had depended on fishing in the river for generations, were unable to benefit from the cash compensation, as they did not know how to best utilize the money to create an alternative livelihood. Similarly, cash compensation given to the people affected by the Marsyangdi Hydropower Project has not appeared to benefit them. The Mid-Marsyangdi project-affected people were displaced from the bustling market of Bhote Odar to Udipur village in Lamjung district. After finding no opportunity to start a business or any other source of livelihood in Udipur village, they moved on to other places in search of greener pastures. In both projects, people who lacked the skills for entrepreneurship ended up worse off after displacement.”

According to Pokharel, in the Kulekhani project, women were the first to start protest against the eviction plan. “They were worried about the prospect of all the compensation money falling into the hands of the menfolk,” Pokharel stated in his article in Himal.

The compensation money for most of the lands acquired by Arun III and Budhigandaki projects often go into the hands of the menfolk due to their traditional role as the head of the household.

Among those being evicted by the Arun III and Budhigandaki projects, there are many Dalits and members of the indigenous communities who are poor, marginalized, and not used to handling money. But the organizations that claim to be the champions of the rights of these communities, have failed to notice these aspects.

Arrangements could have been made to cause minimum harm to the evictees. Nepal has already done such thing in the past. The government of Nepal had resettled around 15,000 people of 1,700 households of Padampur, Chitwan who were displaced by the Chitwan National Park, in a new location in the district. The resettlement program was started in the 1990s and concluded in early 2000s*. The government had provided land-for-land compensation to those with little land. And those who owned more than two bigha [1.35 hectares] of land were provided land-for-land compensation for two bighas and monetary compensation for the remaining land. The government did not tell them “we’ve already paid you, so it doesn’t concern us where you go”. The landless of Padampur had been provided three kattha [10,935 sq ft] of land as compensation. This made the life of Padampur evictees less difficult in the new place.

But this successful strategy was not applied in Arun III and Budhigandaki projects. The Kulekhani strategy, which has been proven to be unsuitable and brutal, has been applied in these two projects.

With regard to those evicted by the Kulekhani project, Pokharel had pointed out this problem also: “They were not provided any counseling and advice for coping with either the physical stress or psychological trauma associated with the displacement.”

“Before starting mega hydropower projects like Karnali and Budhigandaki, lessons need to be learnt from Kulekhani,” Pokharel had suggested 32 years ago. Pokharel later went on to become the vice-chairman of the National Planning Commission, but there is no indication of his advice being followed.

Maybe our planners, activists and organizations working for the Dalits, indigenous groups and the landless think alike that only those displaced by the Panchayat-era Kulekhani project have had to suffer, and those about to be uprooted by Arun III and Budhigandaki, which are being developed under the present democratic regime, will automatically enjoy a life of luxury.

Maybe that’s why nobody is heeding Dr Jagadish Chandra Pokharel’s repeated advice that we should learn lessons from the Kulekhani displacements.