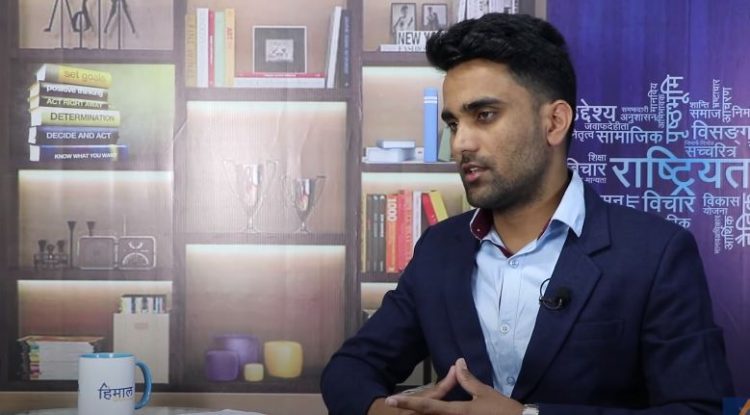 Nabin Joshi in a screenshot of the interview.

The Youtube channel of Himal Online TV on April 14, 2020 uploaded an interview with Nabin Joshi, referred to as a psychologist in a video entitled “Pahilo Patak Bistrit Khulasa, Jannuhos Adrisya Khel, K Ho Bastabikta?” [Detailed revelation for the first time, know about the hidden game and the reality]. The video is trending in Nepal and is currently trending as number 11 on Youtube. It has already been viewed more than 180,600 times until Tuesday afternoon.

In the interview Nabin Joshi speaks in length about COVID-19 and makes several claims. The interviewer hasn’t provided information about Joshi other than that he is a psychologist. According to Joshi’s Facebook page, he has a master’s degree in counseling psychology from the Tribhuvan University (TU). Many people have also reacted to the video that Joshi shared on Facebook.

South Asia Check has examined eight of his claims.

“About 25,000 to 56,000 people die each year from influenza-like illness. These deaths occur due to season change.”

On the basis of these facts, Joshi’s claim is false. 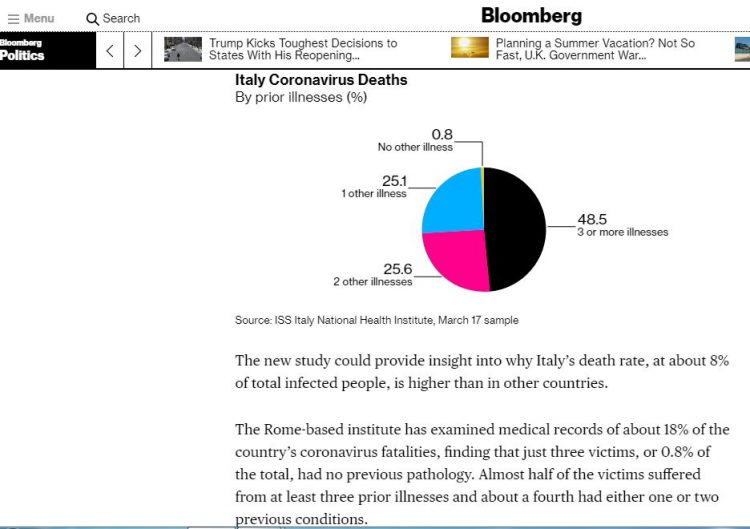 A screenshot of the Bloomberg report.

The graph Joshi showed was taken from Bloomberg News and Bloomberg had analyzed the graphs prepared from Italy National Health Institute’s report. The analysis presented by Joshi in the video contradicts the analysis prepared by Bloomberg just below the graph. The Bloomberg analysis states, “The Rome-based institute has examined medical records of about 18% of the country’s coronavirus fatalities, finding that just three victims, or 0.8% of the total, had no previous pathology. Almost half of the victims suffered from at least three prior illnesses and about a fourth had either one or two previous conditions.

More than 75% had high blood pressure, about 35% had diabetes and a third suffered from heart disease.”

Joshi has given misleading information by misinterpreting the facts in the Bloomberg report.

“Its [PCR test kit’s] inventor was Kary B Mullis. He received the Nobel Prize for inventing this test kit 27 years ago. Since that time, WHO hasn’t recognized this kit for diagnostic purposes. Nobody used the kit for the past 27 years but it is being used now.”

The first part of his claim is true. American biochemist Kary B Mullis was awarded the Nobel Prize for Chemistry in 1993 for inventing polymerase chain reaction (PCR) method.

But the second part of his claim is false. A report published by WHO on April 29, 2003 states, “WHO encourages each country to designate a reference laboratory for investigation and/ or referral of specimens from possible SARS patients. Laboratories performing SARS-specific PCR tests should adopt strict criteria.”

Similarly, WHO established a WHO working group on PCR protocols for detecting subtype influenza A viruses in 2007 to serve as an expert technical group to provide guidance to WHO on the use of PCR in the context of the WHO Global Influenza Surveillance and Response System (GISRS).

As PCR method is used for many other purposes Joshi’s claim is inaccurate.

“When reports of the emergence of the coronavirus in Wuhan came on December 31, the WHO said there was no reason to panic. But after 6-7 days, on January 8, the WHO held a meeting and said the virus is very aggressive and it’s a pandemic.”

A disease outbreak news update published by the WHO on January 12, 2020 stated that the coronavirus was only seen in Wuhan and detailed investigations were ongoing.

On January 13, 2020 officials confirmed a case of COVID-19 in Thailand, the first recorded case outside of China.

Based on the facts above, Joshi’s claim is false.

“Nine years ago today, in 2011, the European Union declared that WHO was a robber organization.”

South Asia Check could not find any such report on the internet. The media would have reported if such a serious accusation had been made by the European Union.

But there are other reports and news items that provide the basis for dismissing Joshi’s claim.

In 2011, the WHO, the EU and other European countries had jointly published a report entitled “Migration and Health in the European Union” and the report has no mention of such an accusation.

Similarly, in the report titled “Everything you always wanted to know about the European Union health polices but were afraid to ask” published in 2014, we found no mention of such an accusation.

In addition, in September 2012, the “Health 2020: the European policy for health and well-being” framework signed by the European Union’s 53 member states also has no mention of such an accusation.

In The New York Times and Science Magazine, some committees and experts have published critical views of the WHO’s response to the swine flu pandemic but these also do not contain the accusation claimed by Joshi.

So, Joshi’s this claim is also false.

“It is meaningless to say that wearing a mask protects you. Mask does not protect people.” 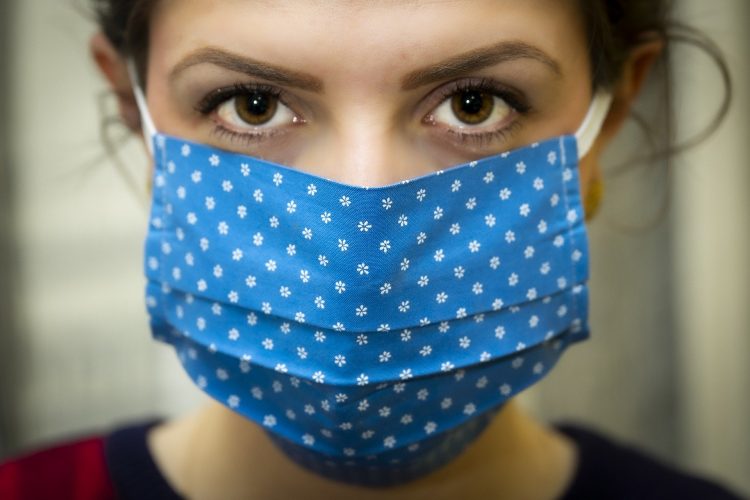 An interim guidance issued by the WHO on January 29, 2020 states: “Wearing a medical mask is one of the prevention measures to limit spread of certain respiratory diseases, including 2019-nCoV, in affected areas. However, the use of a mask alone is insufficient to provide the adequate level of protection and other equally relevant measures should be adopted.”

Similarly, the CDC in a report said, “The use of simple cloth face coverings to slow the spread of the virus and help people who may have the virus and do not know it from transmitting it to others.”

As the two major expert organizations in the health sector, the WHO and the CDC have said that wearing masks prevents the spread of COVID-19 to some extent, Joshi’s claim is false.

“One hundred years ago today, even then, there was the H1N1, a Spanish flu. Ten million people died from it.”

According to a report titled “1918 pandemic (H1N1 virus)” published by the CDC, the Spanish flu of 1918-1919 infected an estimated 500 million people or one-third of the world’s population. The number of deaths was estimated to be at least 50 million worldwide with about 675,000 occurring in the United States.

So Joshi was wrong here also.

An article published by The New England Journal of Medicine reported, “The overall case fatality rate has been less than 0.5%, and the wide range of estimates (0.0004 to 1.47%) reflects uncertainty regarding case ascertainment and the number of infections. The case fatality rate for symptomatic illness was estimated to be 0.048% in the United States and 0.026% in the United Kingdom.”

Similarly, an article published in Plos One journal stated, “Investigators have suggested the case fatality ratio (CFR) for pH1N1 may have varied between 0.01% and 0.008%. Although these CFR estimates are probably based on under-estimates of death due to pH1N1, they are two orders of magnitude lower than estimates of the CFR up to 2% that have been widely accepted for the pandemic of 1918–19.”

Similarly, according to a Reuters news report of January 13, 2013, an international research group said that swine flu mortality rate was only 0.02%.

By looking at the previous reports and investigation, even though there is no worldwide homogeneity in swine flu mortality it is obvious that it is not 9% as claimed by Joshi.

According to the WHO, the mortality rate of people infected with bird flu (H5N1 virus) is about 60 percent.

Similarly, in one of the report published by CDC on bird flu reported, “Although human infections with this virus are rare, approximately 60% of the cases have died.”

Since the mortality rate of bird flu is much higher than Joshi’s claim, he is wrong again.

The “situation report-46” published by WHO on March 6, 2020 states: “While the true mortality of COVID-19 will take some time to fully understand, the data we have so far indicate that the crude mortality ratio (the number of reported deaths divided by the reported cases) is between 3-4%. For seasonal influenza, mortality is usually well below 0.1%.”

These figures also confirm that Joshi’s claim is false.