Fact-checking the Nov 15 address to the nation 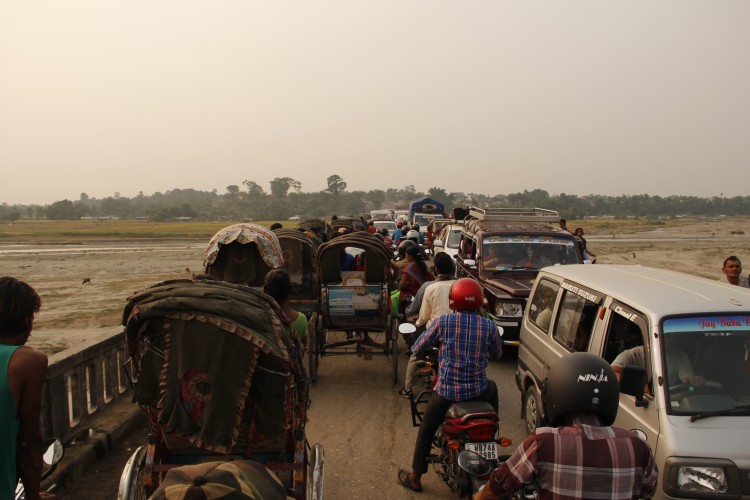 Vehicular traffic at Mechi Bridge at Kakarbhhitta on Nepal-India border in this November 15 photo.

Prime Minister KP Sharma Oli, while addressing the nation on November 15, 2015, made statements on several issues including the new constitution and the devastation caused by the April earthquake.

South Asia Check has examined some of the statements.

Prime Minister’s first statement: The provision of proportional inclusion has been institutionalized (by the new constitution).

One of the major demands of the agitating Madhesi parties has been that the provision of ‘proportional inclusion’ be included in the new constitution.

The agitating parties have been demanding that the term ‘on the basis of proportional inclusion’ be included under the ‘right to social justice’ section of the new constitution.

It is alleged that India has also been exerting pressure on the government of Nepal to amend the constitution as demanded by the Madhesi parties.

Click here to read about the alleged Indian-proposed amendments.

Amid this situation, Prime Minister Oli claimed that the new constitution has already institutionalized the principle of ‘proportional inclusion’.

The preamble of the new constitution states that the constitution is ‘determined to create an egalitarian society based on the principles of proportional inclusion and participation’.

Therefore, Prime Minister Oli is correct in saying that the provision of ‘proportional inclusion’ has been institutionalized by the new constitution.

Second statement: As the constitution is a dynamic document, there is ample space for its further improvement and development.

Article 274 of the new constitution states, “The constitution cannot be amended in a way that contravenes Nepal’s sovereignty, territorial integrity, independence and sovereignty of the people.”

This means all provisions of the constitution can be amended not contradicting the aforementioned vital issues.

The constitution has not even made multiparty democracy immutable.

Clause 8 of Article 274 has mentioned that constitution can be amended by at least two thirds majorities of the existing members of both houses of the federal parliament.

Therefore, Prime Minister Oli is correct in saying that the new constitution has given enough room for further improvement and development.

Third statement: About 9,000 people were killed, 23,000 were injured and hundreds of thousands were made homeless by the devastating earthquake.

Post Disaster Needs Assessment (PDNA) report released by the National Planning Commission in mid-June has stated that “to date, there are over 8,790 casualties and 22,300 injuries. It is estimated that the lives of eight million people, almost one-third of the population of Nepal, have been impacted by these earthquakes.”

Click here to read the statistics prepared by the Ministry of Home Affairs.

The statement of Prime Minister Oli almost matches both statistics, and so this statement is also correct.

Fourth statement: The obstruction in supply even from customs points that do not have any security problems has left me disappointed.

South Asia Check visited Kakarbhitta customs point in eastern Nepal on November 11, 13 and 15 to get first-hand information about the supply situation. There was no presence of the cadres of agitating Madhesi parties at the customs point and no security problem was observed in the vicinity. On the Indian side, a long queue of cargo vehicles was awaiting entry to Nepal. See video.

Therefore, this statement of Prime Minister Oli is also correct.

Fifth statement: We are well aware about the losses suffered by the business community who have been subjected to billions of rupees in demurrage for the goods stuck on the border.

South Asia Check asked Shishir Kumar Dhungana, the director general of the Department of Customs, about the demurrage charges to be paid by the Nepali business people. He said, “Due to the blockade of the customs points, Nepali business people are made to pay demurrage charges at three points: Shipping Lands, Kolkata Port and Dry Port at the Nepal-India border. Businessmen have told us that they will be made to pay up to Rs 500,000 in demurrage per cargo container at the three points [for the duration of obstruction].’

He agreed with the statement of Prime Minister Oli that Nepali business community will have to pay billions of rupees as demurrage due to the obstructions.

Therefore, the prime minister’s this statement is also correct.

Sixth statement: It was estimated that about 500,000 citizens could be pushed to poverty due to the devastating earthquake.

The PDNA Report released by the National Planning Commission in mid-June has cited a World Bank report, which says “the earthquakes will end up pushing an additional 2.5 to 3.5 percent Nepalis into poverty in FY 2015-2016 which translates into at least 700,000 additional poor.”

Therefore, Oli is wrong in estimating that about 500,000 citizens could be pushed to poverty, because no new report has come out yet to substantiate his estimation.