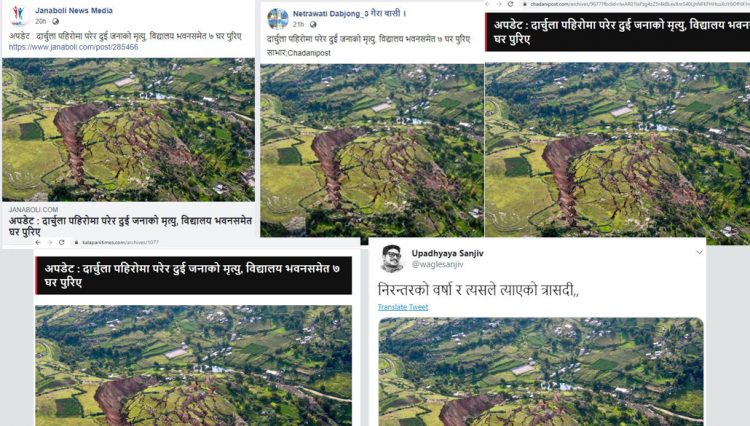 Many social media users have shared the Darchula landslide news along with a picture.

“Update: Two killed in Darchula landslide, seven houses including a school building buried,” read a news headline with an accompanying photograph of a landslide, which was widely shared on social media on July 20.

The news report with the photo was published by a news website named Kalapani Times on July 20. Janaboli, another news website, also published the news with exactly the same headline and the photo. But Janaboli labeled the photograph as ‘File Photo’. South Asia Check found that the news of the landslide was true but the photograph in question was misleading.

Sanjiv Wagle, who identifies himself as the editor-in-chief of a news website called Gundruk Khabar, tweeted the landslide photo with the following words: “Incessant rain and resulting disaster.” After Twitter users commented on and questioned his Tweet, he replied: “I just attempted to show the disaster situation caused by the rain and landslide. The news was not mine. I didn’t publish that.” His Tweet, posted at 9:45 pm on July 20 has drawn 30 comments and retweets and 117 likes until Thursday.

A reverse image search of the photo on Google and Yandex showed that it was a more than two years old photo of a landslide in Cusco of Peru in South America. In March 2018, a slow, week-long erosion of the farmland had culminated in a landslide in the Peruvian village of Lutto Kututo. Because the landslide occurred over a week and the area was devoid of human settlement, there was no human casualty, according to reports. But, the landslide destroyed 100 houses, according to Dave Petley, a professor at University of Sheffield in the United Kingdom, who runs a popular landslide blog. Some news websites in Rwanda and Uganda have also published the Peru photo claiming it depicted a landslide in those countries. Running a Google search with keywords “landslide image” results in the photo appearing at the top of the page.

Watershed expert Madhukar Upadhya said misleading photos such as the one in question tend to circulate widely during the monsoon season, when landslides and floods wreak havoc across Nepal. “Every year during the monsoon season, such photos are shared widely. It seems people do this in an attempt to draw the attention of the relevant authorities to these disasters. Also, some people tend to act out of a selfish desire to break news,” he told South Asia Check. He said nobody believes that such a place as shown in the picture exists in the mid-hills of Nepal.

From all this, we can conclude that the photo used to depict the Darchula landslide is misleading.

These ‘basic medicines for Covid-19’ shouldn’t be taken without doctor’s advice A handwritten ‘Covid tablets’ list is circulating on Facebook and messaging apps such as WhatsApp and Facebook Messenger among others. Read More
A supposed home remedy for boosting blood oxygen levels is unfounded A social media post claims sniffing a mixture of camphor, cloves, carom seeds and eucalyptus oil boosts blood oxygen levels. We found the claim is unfounded. Read More
Old foreign photos being circulated as Nepal wildfire photos Nepal’s major cities including Kathmandu and Pokhara are blanketed by the smoke from the raging wildfires across the country over the last few days. Read More