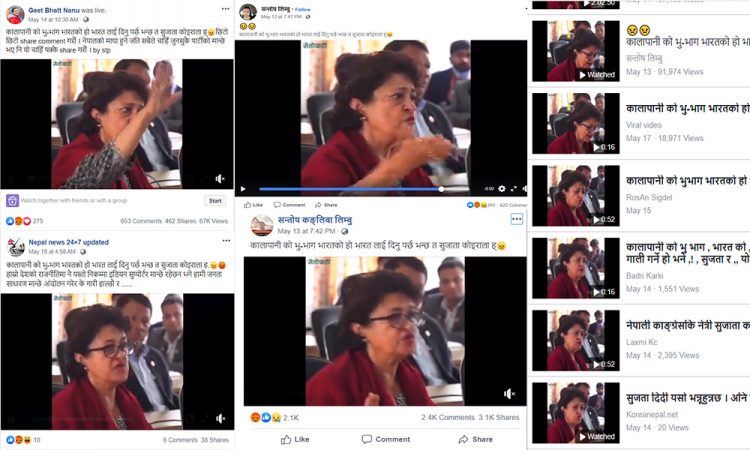 Nepal’s social media is abuzz with comments and criticism following the news of inauguration of a strategic “link road” connecting India’s Dharchula district with China on May 8. The inauguration of the road, which passes through Lipulekh, a territory claimed by Nepal, was widely reported in the Nepali media. Border disputes between India and Nepal are a recurring phenomenon and whenever a dispute erupts, Nepalis express views with intensely nationalistic fervor on social media. And during such times false and misleading information spreads though the social media platforms. Last week, we fact-checked a viral video involving an anti-India demonstration in Butwal, which was six-months old, but was being shared as if it was new.

A video clip featuring Sujata Koirala, a central member of the opposition Nepali Congress party and former deputy prime minister, is being widely circulated on social media since May 13. The video clip with Nepali text reads: “Sujata Koirala says the Kalapani territory belongs to India and should be given to India.” The text and the video clip are being widely shared on Facebook. Two video clips of different lengths (one is 16 seconds long and another 52 seconds long) are being shared on Facebook with similar claims.

The video clip has also been shared on video-sharing platform TikTok. Some users have shared the 16-second video clip with the same claim.

Both video clips start with Sujata Koirala’s statement: “The Kalapani territory belongs to India and should be given to India”. The logo of news website Setopati appears on the top left corner of both the video clips.

Speaking at a meeting of the International Relations Committee of the Federal Parliament on May 11, Sujata Koirala had strongly rejected the news reports that have gone viral on various websites.

A Nepali news report headlined “Kalapani, Lipulekh and Limpiyadhura should be leased out to India: Sujata” published on January 5, 2020 by journalist Rishi Dhamala’s news website ‘Reporters Nepal’ was republished by various websites with a different headline that read, “The Kalapani territory belongs to India and should be given to India: Sujata Koirala”. On May 11, Setopati had published a 5 minutes 44 seconds long video clip of Koirala speaking about the news reports in the parliamentary committee meeting.

The video titled “Let me lead the border talks with India: Sujata Koirala” published by Setopati begins with this statement: “Just now, I read a news report. It came just now. It’s about me. It was also published six months ago. They have started it again. Its headline says the Kalapani territory belongs to India and should be given to India. How can I say such a thing? I have fallen behind in politics because I have always stood firm on the issues of national interest. Everyone needs to understand this.”

She said she had only proposed leasing out the territory to India since Nepal does not have the capacity to build roads there. “All I had said was we can lease the territory out [to India] for 5-10 years. I never said we should sell our country,” she said.

In both the versions of the video posted on social media, Koirala’s statement has been truncated and presented out of context. The social media users have presented the clips in such a way that Koirala’s statement is bound to be misinterpreted. We found that the original video published on Setopati was later edited by social media users. They removed the first ten seconds from the original video so that at the very start Koirala could be heard saying: “The Kalapani territory belongs to India, it should be given to India”. Similarly, the remaining parts of the original video have also been edited apparently with the intention to create controversy.

So we have concluded that the viral video clips were manipulated versions and grossly misrepresent Koirala’s point.