Brace yourself for toxic winter air

Winter is approaching in Kathmandu. Winter is not only about chilly weather but also more toxin in the air we breathe.

Govinda Lamichhane, an inspection official at the Department of Environment, said that during the monsoon season the rain washes away the dust particles (aerosols) in the atmosphere, but in the dry season (winter) as rain is less frequent, dust particles remain in the atmosphere for longer. Also, during the winter, the cold air near the earth’s surface cannot flow because it remains trapped under a layer of warmer air. This phenomenon leads to increased air pollution.

Nepal government has been measuring the air quality of different places of Kathmandu since 2016. Shankar Prasad Paudel, the spokesperson of the Department of Environment said that though the department has archived the data of the last three years they have yet to process the data scientifically for a comparative analysis of air pollution of Kathmandu.

Therefore, for this report, South Asia Check has studied the data published by the World Air Quality Index Project available on their website and analyzed the air quality index (AQI) data of Ratna Park, US embassy and Phohara Durbar in Kathmandu. We have studied the data on PM 2.5, which are particulate matters of less than or equal to 2.5 microns in diameter. South Asia Check has examined the air pollution level of five months starting from November 2018 (beginning of winter season) to March, 2019, when the temperature begins to warm up. 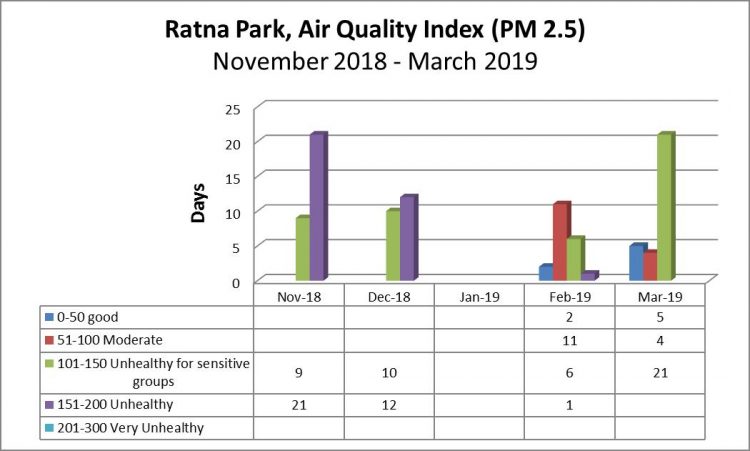 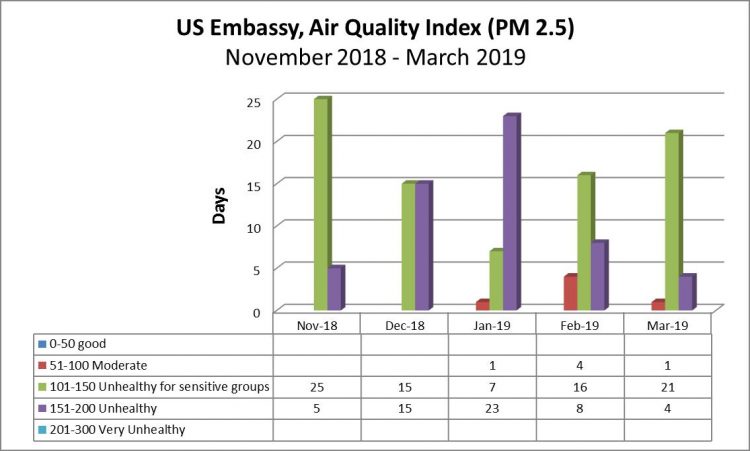 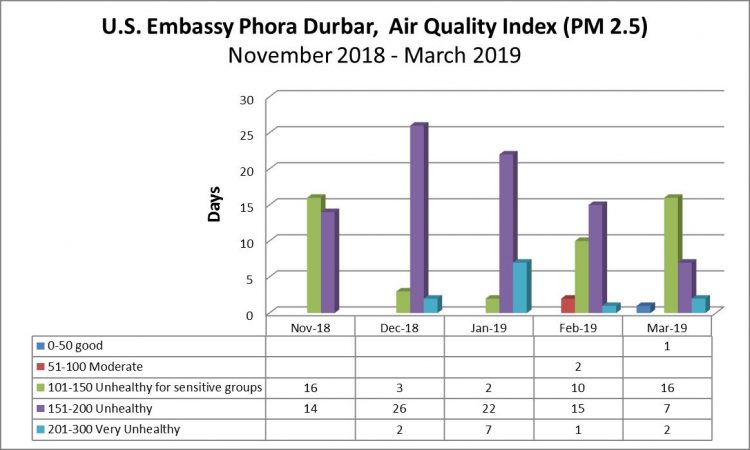 Here, a consolation for us is that none of these three places have PM levels higher than 300. That means our air is not much hazardous.

While we were preparing this report on November 7, the air quality index value at 11 am in New Delhi, the Indian capital, read 349. In Delhi, air pollution has created a lot of panic.

Winter will be over in a few months. However, the toxicity in the Kathmandu air will not go away soon. Earlier this year Kathmandu’s air remained toxic even after the end of winter and onset of monsoon. 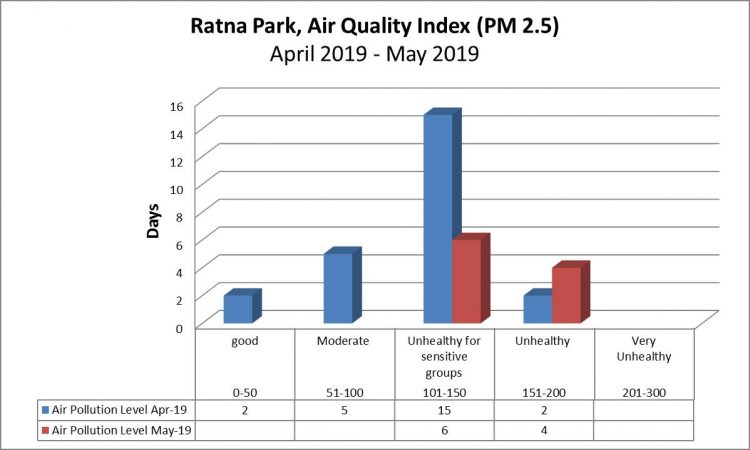 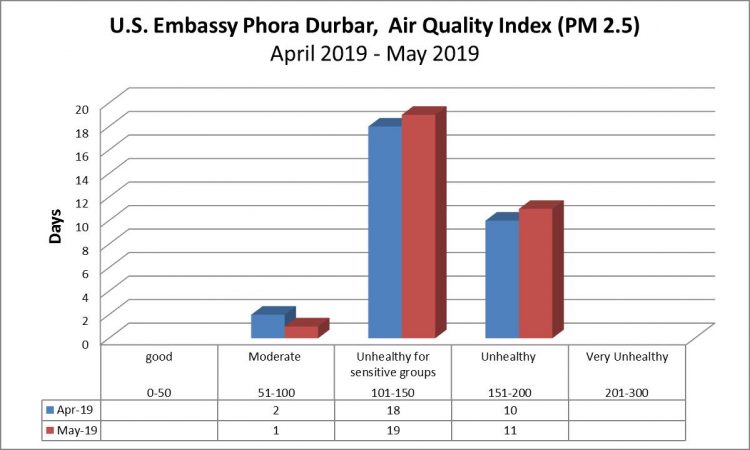 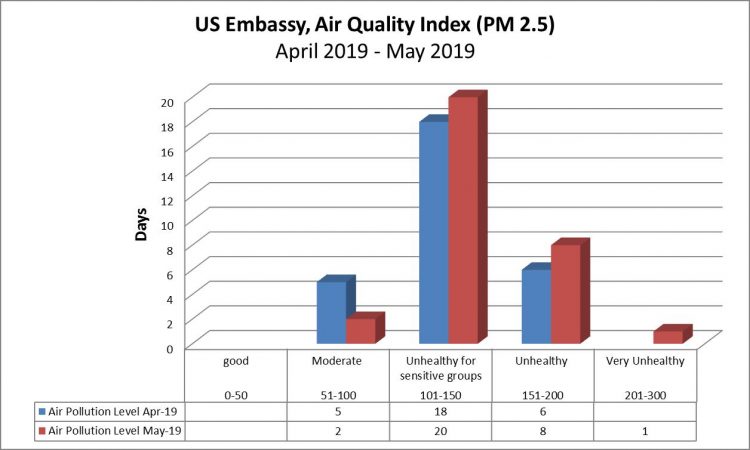 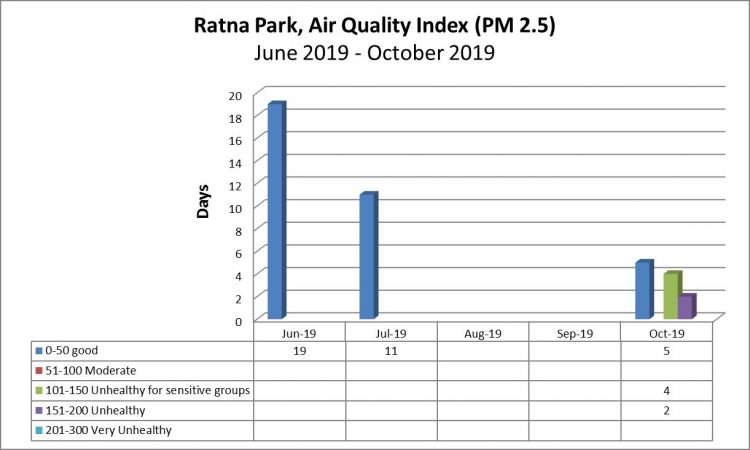 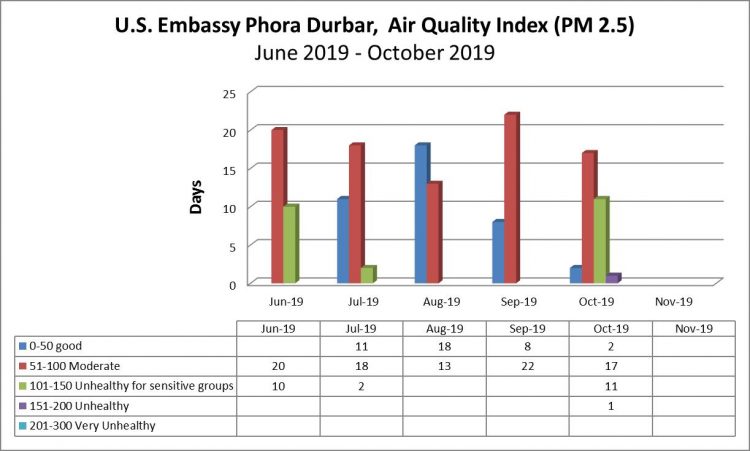 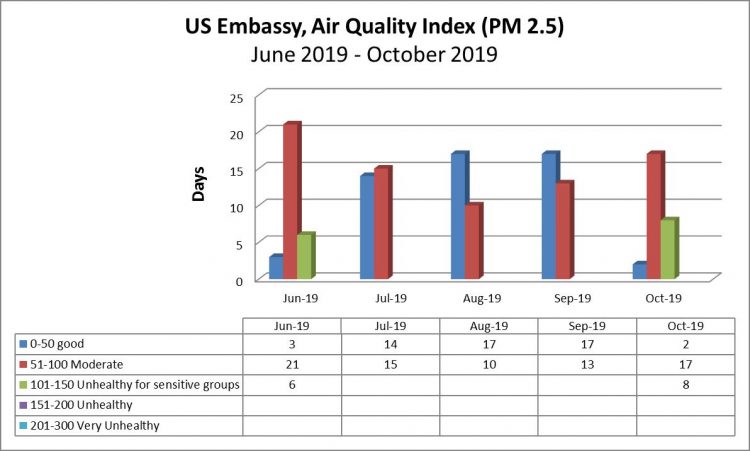 Emissions from vehicles and brick kilns, open burning, delay in road construction, and crusher plants among other things are responsible for making the air toxic.

“In Nepal in the absence of systematic data-keeping, it is difficult to estimate the growth rate of patients in hospital during the cold and dry seasons. However, air pollution is deteriorating. So, instead of focusing on figures, measures should be taken to reduce the air pollution at the earliest,” said pulmonologist Dr Arjun Karki.

Dr Krishna Man Maskey, vice president of the Public Health Association argued that there are policies and laws to control air pollution but due to weak monitoring mechanism, loopholes in inspection and lack of punishment, air pollution is not under control.

Dr Karki advises the following to protect yourself from air pollution and related hazards in winter: