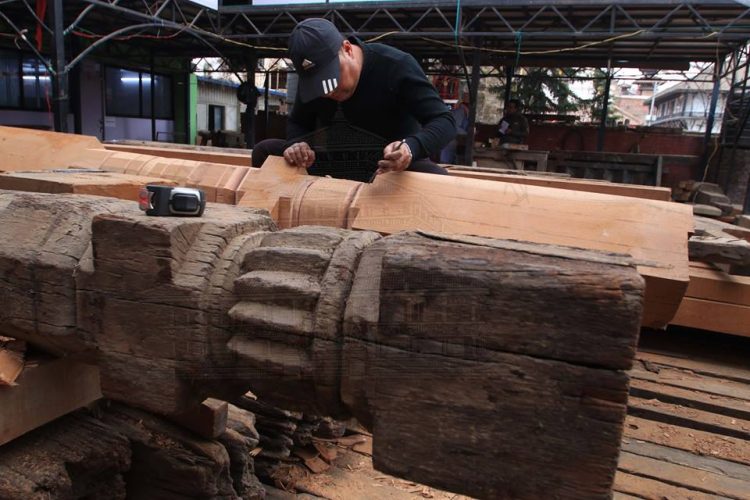 Nepal government’s annual policy and program 2018/2019 states that the cultural heritages destroyed by April 2015 earthquakes will be reconstructed within three years. The Kasthamandap Reconstruction Committee, established in May 2018 to rebuild the Kasthamandap Temple at Kathmandu Durbar Square, aims to finish the work ahead of schedule.

South Asia Check this week visited the president of the reconstruction committee Rajesh Shakya for updates of reconstruction. Here is the excerpt of talk:

May 6, 2018 – Division of work and formation of working group that includes expert group, advisors’ group and conservation architects’ group

December 13, 2018 – Department of Archeology approves the blueprint of Kasthamandap.

By June -July 2019 – Target to complete the first floor

According to the quarterly expense report published in mid-January 2019, Rs 9.1 million was spent and of this Rs 2.7 million involved advanced payments. By mid-April, another quarterly report is to be published.

The committee hasn’t sought support from donor agencies as it plans to rebuild the temple through domestic resources and traditional expertise. Kathmandu mayor Bidya Sundar Malla has expressed commitment that the Kathmandu Metropolitan City itself will fund the reconstruction.

All the experts and archeologists involved in Kasthamandap reconstruction are Nepali.

Most of the artisans are from Bhaktapur and they are led by woodcraftsman Laxmi Bhakta Rajchala. Unskilled workers are from outside Kathmandu.

According to the DoA, Kasthamandap reconstruction will require 1,758 cubic feet of best quality sal timber. The timber needed for pillars and beams was brought from Bardibas of Mahottari district. The rest of the timber was brought from Hetauda, Rautahat and Kailali. For the soil needed for reconstruction, samples from various places of Kathmandu were tested and the soil from Tahachal area proved to be ideal and it is being used.

Coordination with other agencies

The committee has been working in close coordination with other agencies including the National Reconstruction Authority and the Department of Archeology. 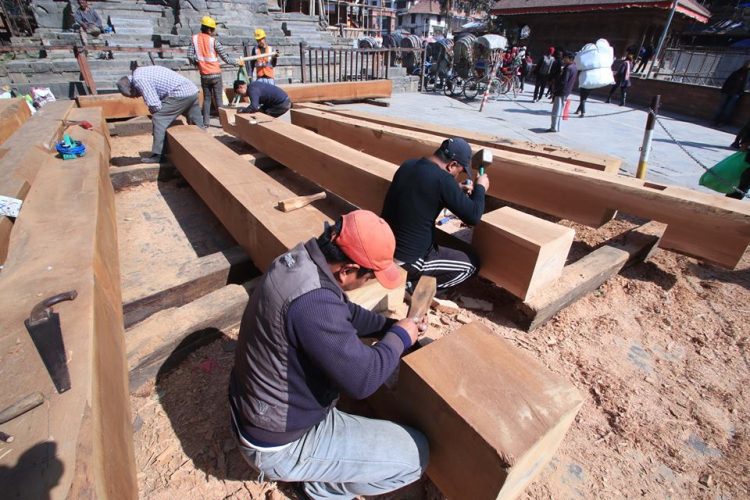 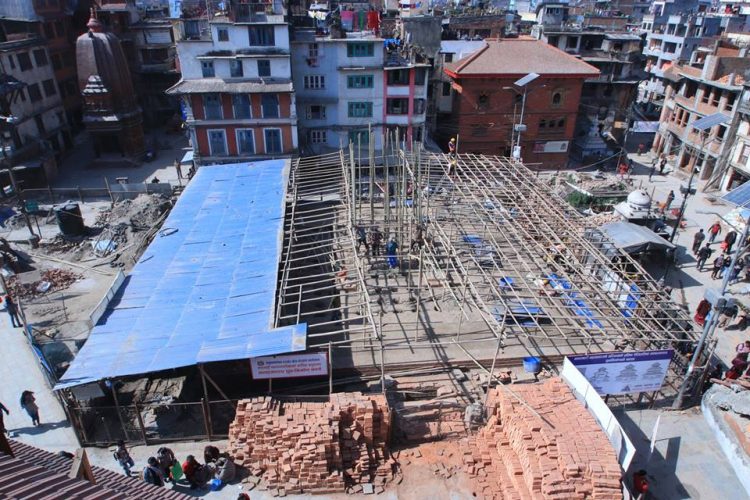 Despite delays, KRC hopes to rebuild Kasthamandap within deadline Government’s policy and program document 2018/2019 states that the cultural heritage monuments destroyed by the 2015 earthquakes will be rebuilt within three years. Read More
Half of quake-destroyed schools rebuilt Of the total 7,923 schools hit by the 2015 earthquakes, 4,098 schools have been rebuilt, according to a government report published in October 2018. Read More
Nepal earthquake recovery aid: Commitments and disbursements After the 2015 earthquakes, Nepal organized an international aid conference where development partners pledged a total of US$ 4109.52 million. So far 16 percent of the pledged aid has been received. Read More