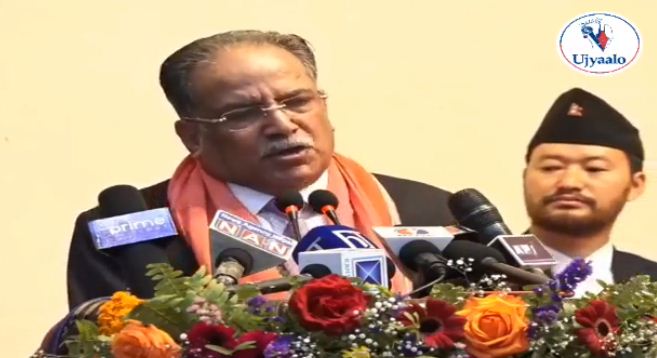 At a function organized by the Youth Association Nepal on May 15, Nepal Communist Party Chairman Pushpa Kamal Dahal, the erstwhile chief of the Communist Party of Nepal (Maoist Center), claimed that he had helped the then CPN-UML leaders, one after another, to become prime ministers. Addressing the function, Dahal exclaimed to the audience, “What do you think of me? Do you see me as an unstable person or an unusual individual who makes prime ministers of UML leaders one after another?”

South Asia Check has tried to examine whether Dahal’s claim is correct or not.

After Dahal’s resignation as prime minister, CPN-UML leader Madhav Kumar Nepal was elected the new prime minister from parliament. But Dahal’s party, the CPN (Maoist Center) had boycotted the election. Addressing the parliament a day before Nepal was elected prime minister, Dahal had said, “Our party condemns this sham process of government formation and will continue to peacefully challenge the move in both the parliament and the street until the president’s unconstitutional order is withdrawn and civilian supremacy restored.”

The full text of Dahal’s address to the parliament was published in Gorkhapatra dated May 23, 2009.
In fact, Dahal had expressed his dissatisfaction even after Nepal was elected prime minister. In a news report titled “I tried to grow ambrosia, but it seems to be growing into a poison tree” published in Gorkhapatra on May 25, 2009 Dahal has been quoted as saying, “With good intentions the Maoist party helped him [Nepal] become a member of the Constituent Assembly, but now we feel betrayed.”

This shows Dahal’s claim that he helped CPN-UML leaders become prime minister is wrong in Madhav Nepal’s case.
Following Madhav Kumar Nepal’s resignation as prime minister on June 30, 2010, new election was held in parliament to pick a new prime minister. In the election, Dahal himself was a candidate alongside CPN-UML chief Jhalanath Khanal and Nepali Congress leader Ram Chandra Paudel.

In the first round of election held on July 21, 2010, none of the candidates was able to secure majority to become prime minister. Jhalanath Khanal withdrew his candidacy from the second round and his party, the CPN-UML, decided to remain neutral in the election. But Dahal continued to contest the elections until the seventh round without success and withdrew from the eighth round on September 26, 2010 and his party, the CPN (Maoist Center), also decided to remain neutral. Now Nepali Congress leader Paudel was the only candidate, but with the Maoist Center and the CPN-UML keeping away, he could not secure majority votes although the election protracted to 17 rounds. Until the 18th round of election, when the constituent assembly ordered that all members must participate in the election, Dahal had been adamant on his stance that an all-party government should be formed under the leadership of his party, the Maoist Center.

“A consensus government is possible only under Maoist leadership,” the report quoted Dahal as saying to reporters at his residence in Nayabazar, adding, “Since the Maoist Center is the largest party in the Constituent Assembly, a key party to the peace process and advocate for Constituent Assembly, only under its leadership that a consensus government is possible.”

But in the 18th round of the election for prime minister on February 3, 2011, in which both Dahal and Khanal, and Ram Chandra Paudel were candidates, Dahal withdrew from the race and supported Khanal.

Although Dahal’s claim that Khanal became prime minister with his support is correct, in making the claim he sounded like he had supported Khanal from the very beginning of the election and this is incorrect.

Therefore, Dahal’s claim that he had supported CPN-UML leaders to become prime ministers one after another is partially correct.