A Youtube grab of Prime Minister Oli at the April 11 video conference.

On April 18, a video clip of the meeting went viral on Twitter and Facebook. People are most likely to follow and believe what the country’s prime minister says. That’s why we have fact-checked Oli’s claims.

There are countless viruses on earth. Most are harmless while some make people sick. Others, such as the novel coronavirus, can be deadly. According to scientists, coronavirus is neither living nor non-living. To understand this, we need to study the evolution of the virus and how it spreads. When outside of a human or animal host, the virus remains inactive. But as it enters the body of human or animal, it not only becomes active, but also rapidly multiplies. The coronavirus falls in the ‘grey area’ between living and non-living, according to Dr Pushpa Mani Kharal, who specializes in general practice and emergency medicine and is associated with Metro Hospital, Kathmandu. “There have been many studies on the virus. In the beginning, scientists believed it was a biochemical. Later on, scientists designated it as non-living. But in reality, it’s somewhere in the middle,” he told South Asia Check. “When it enters a living thing (or living organism called hosts), it replicates. When it’s on a non-living thing, it remains inactive.”

According to scientists, fatality rates of the novel coronavirus depend on how it fights our body’s immune system, its growth and transmission.

Whether the virus is living or non-living is still debatable, though. An article in the International Journal of Current Microbiology and Applied Sciences described it as living while a study published by the US National Library of Medicine National Institutes of Health in 2016 said it could be non-living.

Based on these facts and statements of physicians and scientists, Prime Minister Oli’s claim is misleading.

“Drink [a lot of] hot water and use steam therapy to prevent yourself from the coronavirus.”

There is no scientific evidence to suggest that drinking hot water or using steam inhalation prevents one from contracting COVID-19. The World Health Organization (WHO) has advised drinking water frequently to avoid dehydration. But there is no evidence that hot water kills the coronavirus, according to the WHO. Dr Kharal echoed the views. “If you drink a lot of hot water, the virus in your throat could be washed down to the stomach,” he said, “But drinking too hot water can be harmful.” He said the steam therapy, which people use to combat cold, wasn’t a proven preventive measure against COVID-19.

“(To protect yourself from the virus) don’t insist on cold things, avoid eating foods like ice cream.” 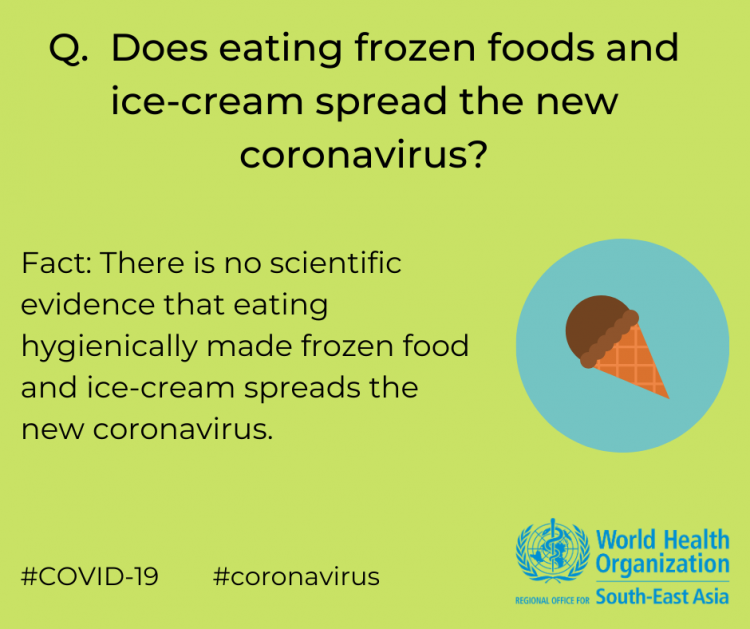 Prime Minister Oli’s suggestion to avoid ice cream comes at a time when the spring season is nearing its end and summer is approaching. The WHO has published flyers about ice cream in its attempt to dispel myths related to the coronavirus. There is no evidence that eating ice cream spreads coronavirus, according to the WHO. “There’s nothing wrong in having an ice cream. But it’s incorrect to say the coronavirus is transmitted through ice cream,” said Dr Kharal. Although it is true that consuming ice-cream causes dip in the temperature of the throat, the claim that it transmits coronavirus is false, he said.

“Wash your hands with warm water whenever possible. This can prevent one from contracting the virus. Washing hands with hot water removes the fat on its outer layer. The virus is non-living. So you can’t kill it, but its problem-causing fat-layer will vanish.”

Soap, which is a key ingredient in protection against the coronavirus, is missing in the prime minister’s claim. It’s now common knowledge that washing hands thoroughly with water and soap for at least 20 seconds prevents the spread of the coronavirus. There are some scientific reasons behind this. Paulli Thordarson, an Australian Professor of Chemistry, has explained how washing hands with soap can be an effective way to fight the coronavirus. “Washing hands with soap was almost like a demolition team breaking down a building and taking all the bricks away,” he told the US news outlet Vox.

Dr Kharal also agrees that soap is an important weapon in the fight against the coronavirus. “Soap has two layers. When mixed with water, one molecule destroys the protein shell in the virus while another molecule is attracted to its protein, which disrupts water,” he said. This feature of the soap is believed to play an important role in annihilating the coronavirus. The US Centers for Disease Control and Prevention recommends hand washing with soap or cleaning with alcohol-based hand sanitizer.

Although part of Prime Minister Oli’s suggestion is correct, the virus cannot be eliminated by hot water alone without soap. His claim that the virus has fat (the fatty substance in his words) is also misleading. Experts say that it is wrong to call the virus’ lipid layer as fat.

“Just wearing a mask is not enough. Also wear glasses with a mask. It swiftly transmits through the mouth, then second most transmission occurs through your eyes. Then only it spreads through nose. ”

This claim is also misleading. Recent studies have shown that the virus spreads from person to person through tiny droplets expelled from the nose or mouth while coughing or sneezing. People contract COVID-19 if they touch their nose, mouth or eyes after touching the surfaces infected with the virus. But there’s no data yet on which of the organs — eyes, nose and mouth — transmits the virus the most. “Since the virus is transmitted through the respiratory system, it’s likely that the nose and mouth come first,” said Dr Kharal. “It can be transmitted by touching the eyes with a hand infected with the virus. But there is no scientific evidence that the eye is the second leading means of infection. ”

Therefore, this claim of Prime Minister Oli is also misleading.