Madhes schools scramble to catch up 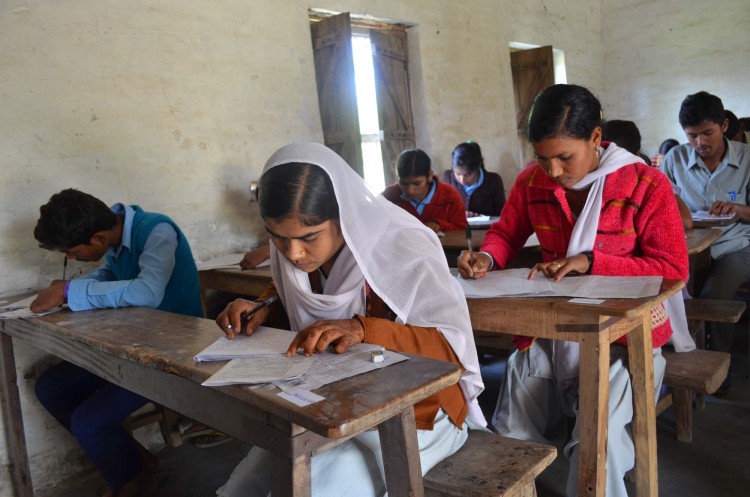 Students at a school in Parsa sitting their exams in this undated photo.

When the ongoing Madhes agitation was at its peak, Ramvinaya Kumar Singh, the chief education officer of Parsa district, visited some public schools to assess the impact of agitation. Previously when he visited the schools, the students would greet with “Good morning, sir.” But this time, he was greeted with “Jaya Madhes, sir”.

“Students seem more enthusiastic about the Madhes agitation,” he said.

In mid-December, when South Asia Check met Abhisek Sah, a grade one student at Birgunj-based Pragya Academy, he was aware of the then ongoing Madhes agitation, but did not know what the agitation was for. He even sang a line from a pro-agitation Bhojpuri song:

Get ready with staves and canes

The April earthquake did not cause major damage to the physical infrastructures in the Tarai. But schools remained shut for three weeks after the earthquake. And soon after the earthquakes, the Madhes uprising erupted, and these took a heavy toll on education in the region.

“Due to the powerful earthquakes of April 25 and May 12 and aftershocks, schools in the Tarai remained shut for about 22 days,” Pramod Tiwari, a resource person of Parsa, said.

Schools in Madhes were forced to shut. As the winter approached, schools reopened. But still, classes were affected occasionally whenever the protests intensified, said Prakash Kumar Upadhyaya, the founder of Birgunj-based Beacon Secondary School.

All schools were not shut

Schools in urban areas remained shut after the local chapters of private schools organizations PABSON and NPABSON decided to express solidarity with the Madhes agitation.

“No school approached us for security for uninterrupted operation. Instead, the private schools organizations decided to shut down schools expressing solidarity with the agitation,” said CDO of Parsa Keshav Raj Ghimire.

But it is not that the schools in the urban areas remained shut throughout the agitation period.

“Many schools ran classes formally/informally during the agitation. Students were even told to come to school without uniform and classes were run in morning and evening shifts. But classes were disrupted during curfew hours,” said Chief Education Officer Singh.

Founder of Beacon Secondary School Upadhyaya said that after an understanding was reached between the schools and the agitating parties, the schools resumed full operation after mid-November (Mangsir).

When the agitating parties realized that attending morning classes during freezing winter would be difficult for students, they allowed schools to run classes during daytime.

“Most students do not have warm clothes and many do not even have slippers on their feet. So they suffer from cold-related ailments including common cold, cough, sore throat and even pneumonia. Some schools in the rural areas do not have sufficient furniture so students have to sit on the cold floor. After we informed the agitating parties about the pitiable conditions, they finally agreed to allow operation of schools during daytime,” said Chief Education Office Singh.

Preparation to make up for lost classes

Both the private and public schools in Parsa are now working in a planned manner to make up for the lost classes.

According to resource person Tiwari, a school must remain open for 220 days a year and classes must run for 190 days while the remaining days are for conducting examinations and other educational activities.

“Due to the earthquakes, schools in Parsa remained shut for about a month. So to make up for the missed classes, the month-long summer vacation was brought down to a week. Both the private and public schools have cut holidays,” said Tiwari.

According to Chief Education Office Singh, schools in Parsa remained shut for 15 days to three months due to the agitation. “Around half of the schools in the district were shut down for only 15 days,” he said.

Also, as major festivals like Dashain, Tihar, Chhath and Teej fell during the agitation period, the closure of schools for about a month did not hamper classes much, said Upadhyaya, the founder of the Beacon Secondary School.

According to Chief Education Officer Singh, the remaining two months of the closure affected 45 school days.

“After the schools started running classes in the morning, we began cancelling the weekly holidays. This will enable us to recover the loss of 20 days. Similarly we have also started running classes during public holidays through which we hope to make up for 12 lost school days. However, we have not cancelled major holidays like Holi, Saraswati Puja, and Maghe Sankranti, which are celebrated in the Tarai with much fanfare. Similarly, we have started conducting full classes even on Fridays,” said Chief Education Officer Singh. He further said schools have started special coaching classes for students of Grade 10 free of cost.

Aastha Khanal, a student of Grade 9 at the Birgunj-based Mascot Academy, said, “For us, coaching is optional. Teachers have asked us to do extra labor at home. So we have more homework than ever before.”