Anonymous sources in newspapers of August 21 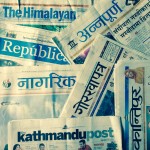