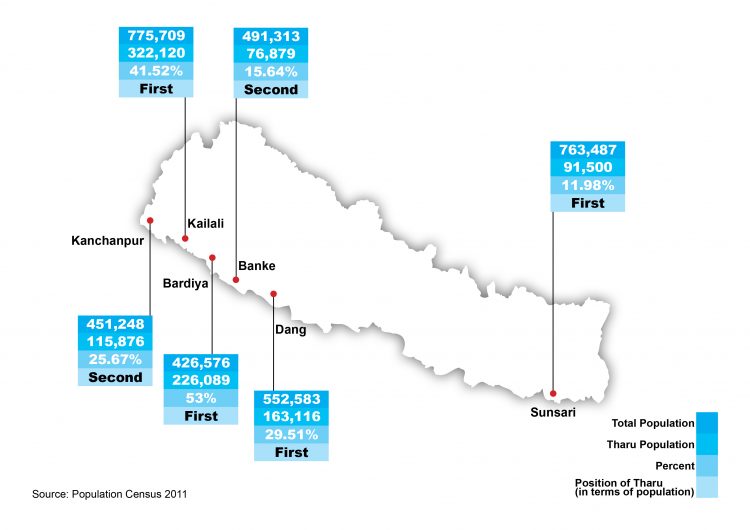 Speaking on the “Tough Talk” program aired on Kantipur TV on December 7, Narayan Kaji Shrestha, the vice-chairman of the CPN (Maoist) Center and a former foreign minister said:

“Kailali is the place (district) where the proportion of Tharu population is the highest”.

Dang, Banke, Bardiya, Kailali and Kanchanpur in the western tarai and Sunsari in eastern tarai are the districts where the proportions of Tharu populations are higher.

Bardiya, and not Kailali, is the district where the proportion of Tharu people is the highest than any other caste/ethnic groups.

In Bardiya, Tharu are 53 percent of the total population whereas in Kailali, they are 41.52 percent.

Thus, vice-chairman Shrestha is wrong in saying that Kailali is the district with highest proportion of Tharu population.

Besides Shrestha, there are many others who have been presenting wrong statistics on the Tharu population in Kailali district.

We came across one instance of the Central Bureau of Statistics itself presenting wrong figures on Kailali’s Tharus.

A report titled “Population Monograph of Nepal- Volume II” published in 2014 by the Central Bureau of Statistics with support from the United Nations Population Fund has presented wrong figures on the Tharu population in Kailali district.

According to this report, Tharu are not among the four major caste/ethnic groups of Kailali district in terms of population. The report has identified Chhetri (57.7 percent), Kami (12.1 percent), Brahman-hill (8 percent) and Damai (Dholi) (4.5 percent) as the major four groups of the district in terms of population. The report states that this statistics is based on the 2011 Census Report. (Read page number 38 of the report)