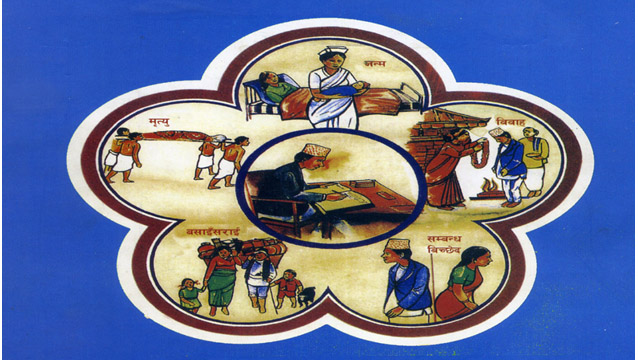 While the controversy over the variations in the date of birth of Chief Justice Gopal Parajuli in his official documents has yet to be resolved, a new controversy started with the revelation that there are discrepancies in the date of birth of social activist Dr Govinda KC himself, who has been staging protest against the chief justice. This created quite a stir on social media and many social media users have admitted that there are inconsistencies in their dates of birth too.

A way to avoid such discrepancies is to effectively enforce vital events registration law. But in Nepal, although there is a Vital Event Registration System (VERS) in place it is still not sufficiently effective.

Vital events registration is regarded as basis for administrative record-keeping and population census. In Nepal, the VERS Act was introduced in 1976. Initially it covered 10 districts only. A government publication titled Panchayat Smarika [souvenir] published on the occasion of the 25th anniversary of the Panchayat system states that it will take some time to make progress in VERS. The Smarika noted that “If public awareness increases, it is expected that good signs will start to appear in the population sector.”

But even 32 years after the statement was made, the progress on this front remains slow. According to Nepal Demographic and Health Survey 2010/2011 and Multiple Cluster Survey 2010, only 42 percent of the total births are registered. The Multiple Cluster Survey of 2014 showed this percentage going up to 58.4 percent. These two surveys covered birth registrations only and excluded other vital events registrations including marriage, death, divorce and migration.

Nepal aims to achieve 100 percent registration of all vital events by 2024 AD.

According to the statistics published by the Department of Civil Registration, the numbers of male births and deaths are higher compared to females.

Looking at the statistics, one does not find the lower female birth figures convincing.

But the department’s statistics show that the record-keeping is sloppy. Most of the annual reports of the department do not have registration figures of all the districts.

Until and unless the vital events registration system is properly managed, the problem of mismatch in dates of birth will continue.