How much does Nepal earn from timber sales?

Forest cover in Nepal spans over 5,962,000 hectares which is 40.36 per cent of the country’s area. According to forest resource assessment published in March 2016, of the total forest cover only 17.32 percent falls under protected areas. And experts say that the use of forest resources has not been utilized optimally.

Talking to Gorkhapatra on November 7, 2016, Dr Bharat Kumar Pokharel, a forestry expert, said, “[Nepal’s] Forests could provide more than Rs 60 billion annually without causing any harm to the existing condition of the forests. But we’ve only been able to harness a mere eight percent of it. Currently our approach has been to protect the forests and not fell down even a single tree.”

According to the annual reports of the Department of Forests, the yearly revenue from timber sales in the past decade has been between Rs 20 million and Rs 60 million. 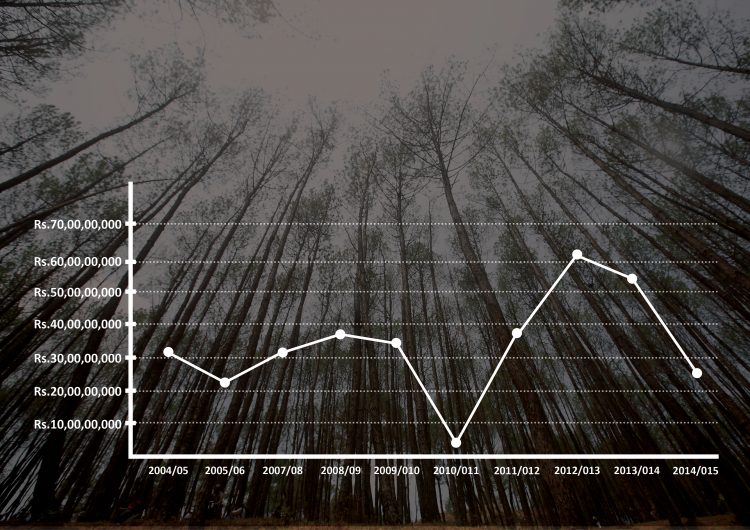 *The report of the year 2006/07 wasn’t available, so figures from that year aren’t included in the chart.

It was only since the last decade that modern management of forest resources have begun in community and collaborative forests in Nepal. Under this approach, old trees are cut down routinely to improve the growth of new trees. This also helps prevent forest fires and minimize rampant deforestation. More recently, the Ministry of Forests has set a target of generating 200,000 cubic meters of timber from these managed forests for rebuilding the homes, schools, hospitals and others structures destroyed by the earthquake.