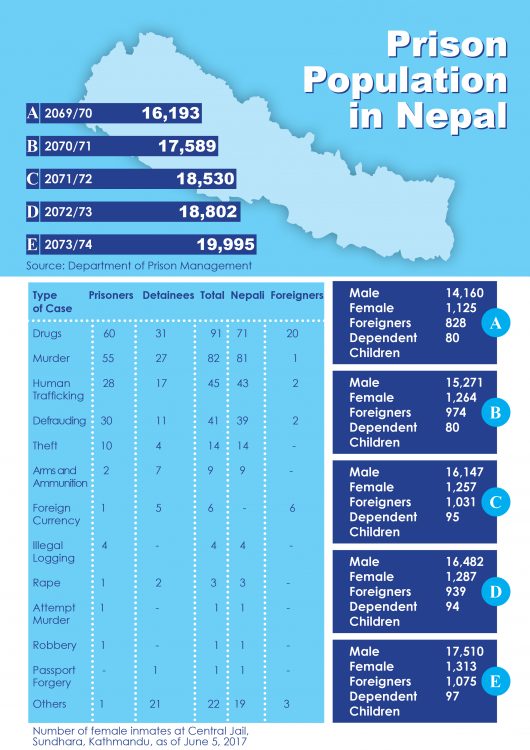 A woman from Palpa is currently serving her term at the Central Jail in Sundhara, Kathmandu for killing her own child. She is mentally disturbed.

“She had beaten her child for playing with water. How could a mother kill her own child? Fate locked her up,” said a fellow inmate at the jail.

“I myself have three more years left. Then I will go home” said the prisoner.

She was convicted of drug dealing. “I got arrested while helping a friend,” said the girl.

Currently there are 320 women imamates at the Central Jail. Those charged with drug dealing claim that they had not knowingly dealt with drugs.

As per the Department of Prison Management, currently there are 1,313 women inmates in Nepal.

While 53 out of the total 74 jails in Nepal house female inmates, in Kathmandu they are kept only at the Central Jail. Most of the women at the Central Jail were detained or convicted in drugs related charges. Others are in jail for murder, attempt to murder, human trafficking, robbery and theft among other crimes.

Women make up just around 7 percent of the prison population in Nepal. When a man goes to jail, the impact on the family is less severe because his wife maintains the household. But if a woman is jailed, the family can be devastated because men tend to remarry. So the women once released from jail have no home to return to.

Similarly when a man is jailed, his wife looks after the children, but if a woman goes to jail, the children join her. There were 97 children in prison with their mothers during the year till April 2017.

The jail administration allows women inmates to keep only children under five years of age. If the mother remains in jail even after her children reach the age of five, normally the relatives take away the children. And if there are no relatives, such children become helpless.